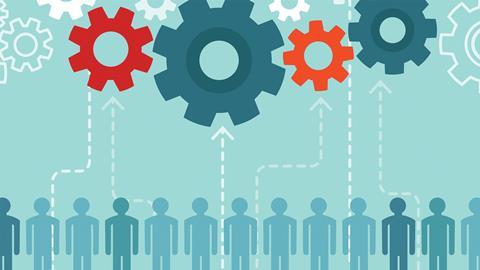 Helping great ideas to rise to the top

When Gillian Fairfield became chief executive of Pennine Acute Hospitals Trust, she took leadership of a workforce that could only be described as demoralised.

The results of the 2014 staff survey placed the organisation in the bottom 20 per cent for staff engagement, motivation and job satisfaction. It had occupied exactly the same position the year before.

“There were good things going on,” emphasises Dr Fairfield, who joined Pennine Acute after chief executive roles at two mental health trusts. “But there was no shared vision, no shared values, no real strategy for the future, very little joined up working, no agreed systems and processes, very poor governance, and no effective partnerships.”

“There was no shared vision, no shared values, no real strategy for the future”

She felt addressing this was key to boosting staff morale. Yet Dr Fairfield was also clear that imposing a top-down vision on already unhappy employees would lead to more rather than less frustration.

Experience in her previous chief executive roles – both at trusts which she ultimately took to foundation trust status – suggested the only way to transform an organisation was to engender genuine staff empowerment.

Bringing the pride back

That is why, within days of joining the Greater Manchester trust, Dr Fairfield had launched the Pride in Pennine project.

Designed to give all staff an opportunity to shape the organisation’s future, the project eschews traditional methods of staff engagement – face-to-face meetings with small groups – in favour of the speed and ease of a technological solution.

“Staff were desperate to change,” explains Dr Fairfield. “So the biggest challenge I had was to harness that good will and effort and move at pace.”

Back in 2014, all 9,500 employees of the trust received a personal e-mail from their chief executive inviting them to share their views on a special ‘crowdsourcing’ website.

Created in partnership with Clever Together, the platform asked staff about their experiences of working in the trust. “We asked people: What is it really like working here; what do you like; what don’t you like; what really motivates you; where do you want this organisation to be in five years’ time?” says Dr Fairfield.

The aim was for staff to define and agree a new vision, set of values and plans for the organisation.

More than 27,000 comments were received in the first weeks of the project. Staff were able to vote for their favourite ideas – a democratic conversation in which the best concepts quickly rose to the top.

Within 100 days, a summit was held to finalise the new trust transformation plan. It brought together 350 members of staff.

“To actually feel the buzz in that room during the big summit was amazing,” Dr Fairfield says. A week later, the three new values – quality driven, compassionate and responsible, and a five-year transformation map – were taken to the board for approval and put up on the trust website.

According to Jon Lenney, Pennine Acute’s director of workforce and organisational development, it is crucially important the values were developed by the staff body.

“If you showed the NHS constitution to any [member of] NHS staff I don’t think anybody would disagree with it,” suggests Mr Lenney. “But if you talk to staff across organisations about how well they know, understand and feel connected to it you’ll get quite variable responses.

“It’s essential to engage people in the process of formulating values because they’ll own them and they will know them.”

The process of developing the values and map also served to highlight some symptoms of the previous lack of engagement. When Dr Fairfield arrived at the organisation in 2014, the sickness absence rate was 5.5 per cent: significantly higher than the NHS average of 4.07 per cent.

During the Clever Together process, it was a theme staff raised again and again.

“Staff were asked what they would like to tackle, and one of the things that came up is we need to tackle sickness absence,” reports Dr Fairfield.

“Sickness absence costs the organisation around £18m a year”

“It was vital because staff realised if people are off sick they may have to cover shifts. It costs the organisation around £18m a year. That’s a lot of money. Staff realised if we could just reduce our sickness absence by half a per cent we could save £1.5m.”

Tackling these figures would have been a daunting prospect for any chief executive. Dr Fairfield once again turned to staff engagement. The second ‘Chief Executive’s Challenge’, set via e-mail and the ‘Pride in Pennine’ crowdsourcing website focused on sickness, absence and job satisfaction.

This time, nearly 2,000 people came forward to engage in the debate. Drawn from all divisions and locations at the trust – which operates across four hospitals and multiple community sites in Greater Manchester – they made 43,955 separate contributions.

The explanations they proffered for low morale and high absence rates were many and varied. Some pointed to a failure on the part of managers to create a supportive environment. Others were concerned by a lack of rewards. The paucity of career opportunities was also raised.

“Nearly 2,000 people came forward to engage in the debate”

Feedback was collated and developed into nine main themes, a crucial step according to Mr Lenney.

Among the themes established were supporting emotional and physical health, offering access to diagnostics and care, and focusing on the physical environment for staff. The ‘Healthy, Happy, Here’ action plan and new behavioural framework which emerged from the engagement exercise clearly reflect these.

Measures include the introduction of a podiatry clinic, Zumba classes, and a farmers’ market.

The plan is separated out into short, long and medium term timeframes (six months, 12 months and by 2017 respectively) but the impact is already being felt. In the three months since the plan was launched, there have been small but sustained reductions in sickness absence.

Dr Fairfield admits some staff were surprised to be asked why the trust had such bad sickness rates. Their response to their chief executive was simple: you can’t ask that.

“I told them: ‘Why not?’ I don’t care what the answer is. I want to hear it. Only when we face that can we have a chance of sorting it out.”

She has now issued a third challenge to her staff: to develop a new quality strategy. Again, it is being built by collecting opinions and via Clever Together. The platform is also being used to gather patient and public opinion on the same subject.

“Anything is possible,” concludes Dr Fairfield. “But only if we give our staff a true voice and stake in the organisation to help shape the future.”

She adds: “We can no longer keep running to catch up to where we should be. We need to leap frog into what is possible. So we work with our staff, asking them how can we innovate, how can we change. By always asking these questions, we keep the momentum going.”