NHS Improvement was warned that the locum pay cap was putting services at Lancashire Teaching Hospitals Foundation Trust at risk months before it was forced to downgrade one of its emergency departments, HSJ has learned.

The provider sector regulator rejected that the cap was the cause of the staffing crisis at the trust that led to the downgrade, revealed by HSJ on Wednesday. 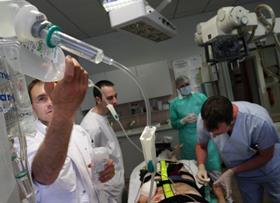 Chorley A&E will be downgraded next week

It has emerged that the trust warned NHSI earlier this year that it expected staffing gaps in the emergency department and medical specialties as a result of staff choosing to work at other North West trusts offering pay above the capped rates.

In board papers from February, the trust said: “There were ongoing challenges with implementing the agency rate cap and the trust was aware that some organisations were offering advantageous pay rates to clinical staff outside the capped rates which had attracted clinical staff away from the trust; Monitor was aware of the position.”

The board papers also said there was pressure on the trust to maintain pay at capped rates as this was part of the criteria to access NHS “sustainability and transformation” funding. NHSI told HSJ that if trusts used the official “break glass” clauses to pay over the capped rates they would still get access to the money.

Despite forecasting a reduction in clinical staff in January the trust board continued to implement the cap.

On Wednesday the trust admitted it had been left with half the number of middle grade doctors needed to staff its two accident and emergency departments at Chorley and Preston. The Chorley A&E will be downgraded on Monday to an urgent care centre between 8am and 8pm, with an out of hours GP service overnight.

In a statement, NHSI said it disagreed with the trust’s version of events and that the cap was not responsible for the trust’s staffing issues.

A spokesman said that while the regulator was aware of the trust’s staffing difficulties “it is not true to say that caps on agency spend have contributed to this problem”.

He added: “It is clear that locally recruitment of a particular speciality of accident and emergency staff has proved very challenging at the same time as demand for services has jumped by around 14 per cent compared with previous years.

“Patient safety is our and the trust’s absolute priority. We will be working with the trust to ensure that arrangements are in place to signpost patients to the appropriate services and that patient needs are properly catered for on each site, with effective transfer arrangements where necessary.

“Trusts are able to breach the caps when they need to bring in staff to ensure patient safety.”

A trust spokeswoman said: “Given that we are a trust in receipt of distress funding we have no alternative but to implement the cap, and fundamentally we believe it is the right thing to do.

“The impact of the November and February caps was challenging but did not present immediate patient safety risks. However, as the cap is not being implemented universally, we are now finding it difficult to secure locums who are being attracted to work for other organisations at a rate way in excess of the cap.

“We have now taken the decision to breach the national agency cap in an attempt to secure immediate medical staff cover to prevent patient safety issues.”