The CQC’s new inspection regime system is being applied in an energetic fashion, so it is especially important for trusts to know when and how to challenge their hospital ratings, write Neil Grant and Paul Ridout

The outcomes of inspections can hinge on very small margins, such as at Kent and Canterbury Hospital

Under the new ratings system, the CQC undertakes the “quality” diagnosis and Monitor (for foundation trusts) and the NHS Trust Development Authority (for NHS trusts) directs the treatment regime.

Where an NHS organisation is rated by CQC as inadequate in relation to governance (the “well led” domain) and one other domain (safe; responsive; effective; or caring) at provider level, the likelihood is that CQC will recommend special measures.

By 2 October, CQC had released ratings on 47 hospital trusts; seven out of 10 trusts were found to be inadequate or requiring improvement. Of these 47, five were rated as inadequate:

More recently the Wye Valley Trust was put in special measures by the TDA on the basis of CQC ratings of inadequate in relation to the safe, caring and well led domains at provider level. Therefore, the idea that the CQC inspection regime is simply helpful free advice is misguided; it has teeth and is being applied in an energetic fashion using the single failure regime operated by CQC, Monitor and the TDA.

Is the rating system fair?

As with any rules based system, it gives rise to some inconsistent outcomes, as the following two hypothetical examples show.

In this example, for a single site hospital provider, the overall rating at provider level is inadequate even though none of the overall core service ratings are rated inadequate. 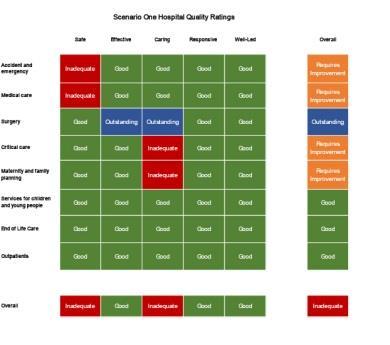 In this second example, again for a single site hospital provider, the overall rating is requires improvement, yet one of the core services has been rated inadequate. 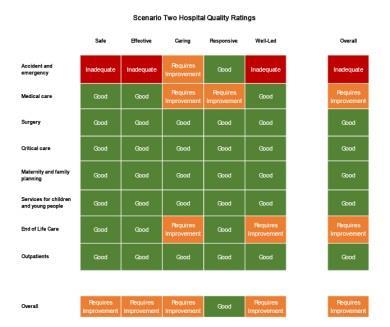 Now let’s look at a real case involving the ratings for Queen Elizabeth The Queen Mother Hospital in Margate and the Kent and Canterbury Hospital in Canterbury, both of which are part of the East Kent Hospitals University Foundation Trust.

You will see from the rating profile for this hospital below (based on an inspection carried out in March 2014) that five of the core service ratings were judged inadequate, yet the overall rating for the location is requires improvement.  This is because only one of the overall domain questions was judged inadequate, namely well led. You need at least two inadequate scores to get an inadequate overall under a domain question, which was only the case in relation to the well led domain. The other three inadequates were spread across safe, effective and responsive. 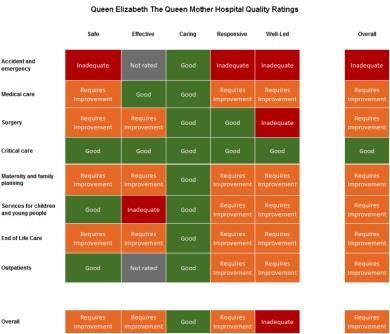 Here, four core service ratings were judged inadequate during an inspection in March 2014 – one less than Queen Elizabeth The Queen Mother Hospital. However, the outcome is very different. Kent and Canterbury was judged inadequate overall at location level given the way the inadequate ratings lined up: two under safe and two under well led. 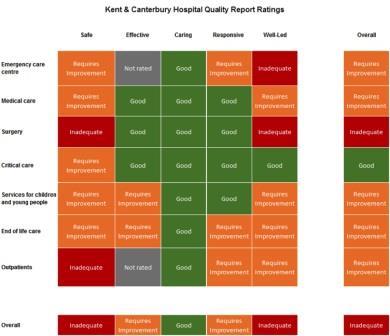 So a hospital with fewer inadequates ends up with a worse overall rating.

Two other points are worth bearing in mind:

‘Challenge early, if you are able to. The reputation and future of your trust could be at stake’

First, at Kent and Canterbury there were 38 core service ratings of which only four were inadequate, yet still the overall rating was inadequate. In addition, only one of the eight core services was rated inadequate overall: surgery. It is a strange system that allows for a small minority of inadequates to give an overall inadequate at location level.

Secondly, and flowing from the first point, small changes to the ratings can make a huge difference overall. If only three core service ratings had been judged inadequate at Kent and Canterbury, the overall rating would have been requires improvement, not inadequate. This takes us to the underlying facts and judgements from the inspection. Trusts should challenge facts and findings that they disagree with as the outcomes can turn very often on very small margins. That is not gaming the system, it is ensuring the inspection report and ratings are fair and do justice to your hospital services.

The key message to take from this article is not to be complacent as regards your CQC inspection. Prepare for it, manage it well and scrutinise the draft inspection report with the utmost care. Any challenge on facts and judgements should be made as part of the factual accuracy check i.e. within 10 working days of receiving the draft report. The rating review process is too late: the report will have been published and in any event is only about process, not the merits of the ratings. So challenge early, if you are able to. The reputation and future of your trust could be at stake.

Neil Grant and Paul Ridout are partners at Ridouts