A recent research report highlights that repeat hospital admissions are a sign that something is wrong in the home environment and simple measures like home checks can end the cycle of discharge and readmission, says Mike Adamson 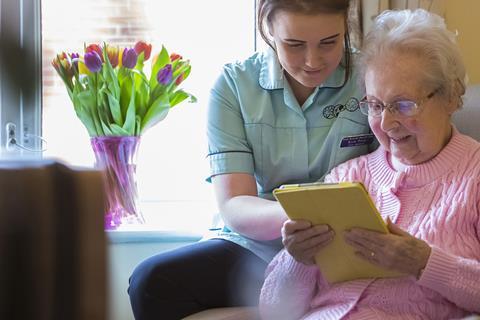 Every person who comes through the front door of the hospital has a back story. With frequent attenders, that back story could be the key to unlocking the reason behind their repeat visits to accident and emergency. Why are they reaching the point of crisis so often? What intervention could be happening earlier on to prevent this? These are the questions we wanted to tackle in our In and Out of Hospital report.

It is no secret that unmet needs for care and support are having an effect on people and patient flow. But the reasons behind someone’s personal health crisis are sometimes hidden behind closed doors.

Loneliness, families living further apart, gaps in social care provision, people feeling wary or uncomfortable about intervention, or people who are coping the best they can becoming overwhelmed – the reasons are as varied as patients themselves. Every story is a human story, with human complications.

And yet often the answer could be simple. We know that many of the issues faced by people in hospital start in the home. A home check for somebody who has been in and out of hospital multiple times could unlock the challenges someone is facing behind closed doors. Falls risk checks. Assisted discharge after a hospital stay can help.

There are too many missed opportunities to prevent a person’s health from deteriorating or to stop their problems from reoccurring once they are discharged across the patient journey.

Lack of support or resolution in other areas of people’s lives has knock on effects, leading to health problems – and over time, more complex needs

We know many issues that affect someone’s health aren’t medical. But lack of support or resolution in other areas of people’s lives has knock on effects, leading to health problems – and over time, more complex needs.

If you can’t pay your bills, you can’t keep the heating on. If your cooker doesn’t work or you can’t get to the shops, you won’t feed yourself properly. Some people we help tell us they don’t feel safe in their own home – safe to move around, safe to go outside – and so they limit their lives, exacerbating a cycle of deterioration.

Preventive care would of course make a big difference, and we have campaigned on this issue for many years, helping to shape the Care Act 2014’s prevention duty and responsibilities. We are still a long way away from that goal, however. And some people may only appear on the radar due to their repeated visits to hospital. So, what can be done?

An agreed upon, consistent approach to flagging repeat admissions would help. In some hospitals, non-clinical staff and volunteers are based in A&E, ready to help people who need support at home before they are admitted.

An agreed upon, consistent approach to flagging repeat admissions would help

Multidisciplinary teams based in communities can help prevent some people from having to go to hospital in the first place. And in Harplands hospital, a dedicated pilot project between British Red Cross and the NHS works with frequent attenders. Within the first few months, it had already saved the hospital £100,000 and helped reduce admissions.

Another opportunity is at discharge. Getting people ready for discharge, mentally and physically. Having those conversations earlier on about what people are going home to, what support they need.

Checklists for anything from equipment to blister packs – we’ve seen people end up back in hospital simply because they were confused about what medicine to take when. Arranging transport home, and identifying who needs assistance to get inside the house – and who would benefit from a home assessment.

Fall hazards in the home are estimated to cost the NHS in England £435m. Fall prevention schemes should be seed funded by the government, and people more susceptible to falls should have their homes assessed before they go home.

We know that even with these changes, some people’s complex health needs mean they will still need hospital treatment. And there’s a bigger debate to be had on how to pay for and deliver health and social care in the future. But in the meantime, there are some simple changes that could make an impact, and could happen now.

Small changes can make a big difference – alleviating stress, making practical changes at home, linking someone to support. These tweaks to the system have the power to make potentially huge differences – to the pressure on hospitals, to budgets – and most importantly, to the people stuck in an endless cycle of discharge and readmission. It’s time to break that chain.