The deaths in English hospitals of a further 108 people who tested positive for coronavirus have been reported today (1 June). The cumulative total is now 26,722.

The figures were collated between 5pm on 30 May and 5pm on 31 May, but due to the need to inform relatives and authenticate reports, many of the deaths occurred earlier than this period. It is also very likely that some deaths which did occur during these 24 hours — and before — have not yet been recorded, normally for the same reasons.

Due to late reporting, hospital deaths data is only considered robust until 26 May. At that point, the weekly running average had declined for 45 consecutive days and, at 926, was 84 per cent lower than the peak recorded on 10 April.

Across the country, deaths are halving every 19 days.

Coronavirus deaths peaked around 9-13 April in all seven NHS England regions, except the North West – which topped out on 16 April.

Deaths in all regions had been falling steadily – and in London, rapidly. But the seven-day period to 26 May has shown a noticeable slowing in two regions and a rise in one.

The biggest regional change was in the South West. Between 12 and 19 May, fatalities fell 47 per cent (68 to 36). But between 19 and 26 May they rose 17 per cent (36 to 42) and have since risen further. The rises were driven by deaths recorded in the Bath/Bristol/North Somerset area. There is no sign of growth in deaths in the peninsula (see chart one).

More significantly, in terms of overall numbers, is the change in the North West and London.

In the North West, the decrease in fatalities was 27 per cent in week one (272 to 199) and just 8 per cent in week two (199 to 183). The change was driven by a plateauing in greater Manchester and small rise in Lancashire and South Cumbria (see chart two). It is very likely that the next few days will see the North West record an increase in deaths, at least for a few days.

The region is now neck and neck with the Midlands in recording the most covid deaths. 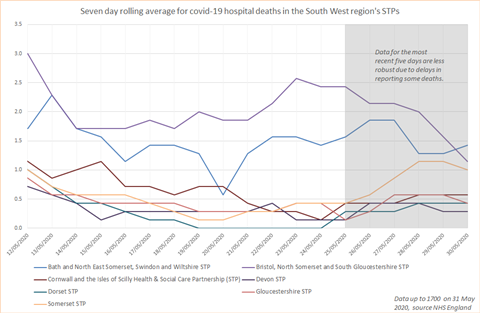 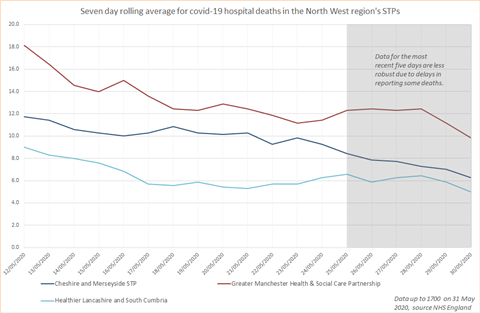 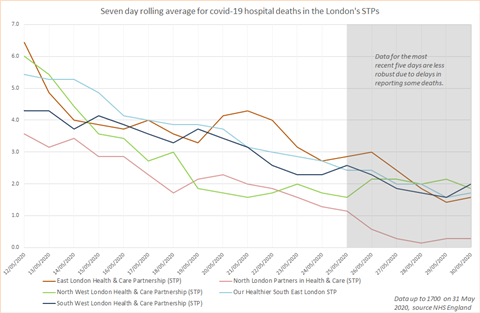 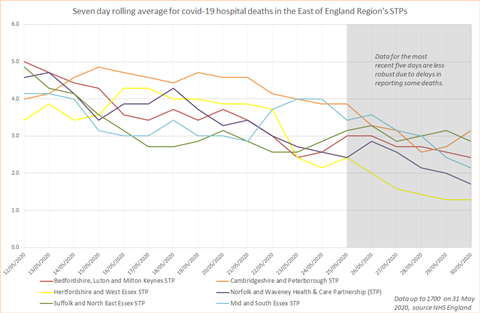