New hot spots are starting to emerge, despite the continued steady decline in covid deaths.

The deaths in English hospitals of a further 149 people who tested positive for coronavirus have been reported today (29 May). The cumulative total is now 26,383.

The figures were collated between 5pm on 27 May and 5pm on 28 May, but due to the need to inform relatives and authenticate reports, many of the deaths occurred earlier than this period. It is also very likely that some deaths which did occur during these 24 hours — and before — have not yet been recorded, normally for the same reasons.

Due to late reporting, hospital deaths data is only considered robust until 23 May. At that point, the weekly running average had declined for 42 consecutive days and, at 926, was 83 per cent lower than the peak recorded on 10 April.

Across the country, deaths are halving once every 18 days.

Coronavirus deaths peaked around 9-13 April in all seven NHS England regions, except the north west – which topped out on 16 April.

Deaths in all regions had been falling steadily – and in London, rapidly. But there are now signs of the fall in the number of deaths slowing, or even beginning to rise.

This is most noticeable in the south west region where weekly deaths bottomed out at 30 on 20 May but had risen to 46 by 27 May. This is especially worrying as death totals from 24 May onwards are likely to increase because of delays in reporting.

The south west was the least affected by the pandemic – and its three most south-westerly sustainability and transformation partnership areas are now seeing only a handful of covid hospital deaths.

However, deaths within the other five STP areas are all on in the increase (see first chart).

On 25 May, Weston General Hospital stopped accepting patients as a “precautionary measure” due to the “high number of coronavirus patients” on site. The North-East Somerset Trust based in the seaside resort of Weston Super Mare is still diverting patients.

Other areas of concern include Mid and South Essex STP, another area with popular coastal resorts (see second chart) and - perhaps most worryingly of all - Greater Manchester, which has the highest number of covid hospital deaths at present (see third chart). 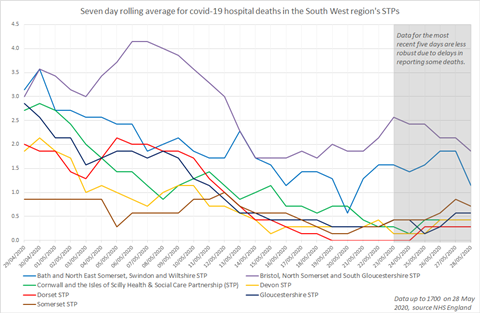 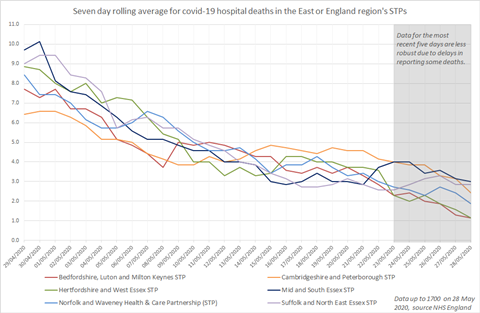 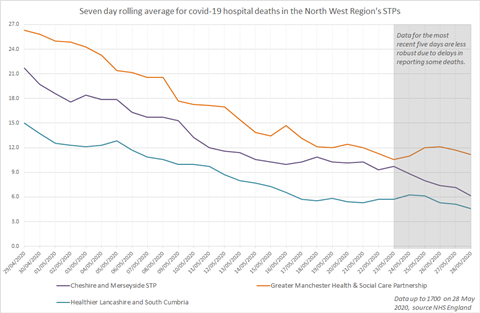