Extensive details of the clinical model for the new Nightingale Hospital in east London have been seen by HSJ — including the criteria for admitting patients and expected difficulties in transferring patients from other acute sites.

The draft model, which was completed on Wednesday, also includes a list of “unfamiliar” tasks that non-specialist nurses will encounter, such as “emergency procedures”.

Senior NHS sources in the capital told HSJ there had been significant debate around the clinical model over the last week. They said the Nightingale had initially been conceived as a full intensive care unit, but critical care doctors have raised concerns about this.

One said the draft was effectively a compromise, that would mean the Nightingale provides ICU care, but only for younger or fitter patients.

It is understood the field hospitals being established in Manchester and Birmingham will follow a different model, providing only “step down” care.

The clinical model for the Nightingale will be “updated iteratively based on wider intensive care clinician input, ongoing analysis of global research, and findings from analytics and improvement teams”, the draft says.

NHS England did not respond when asked to comment. 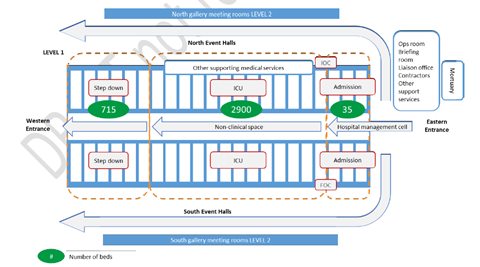 The draft document says London’s existing intensive care units should consider transferring patients to the Nightingale if they have “confirmed covid-19 related respiratory failure”, and require endotracheal intubation for between one to 10 days, among other criteria.

But patients scoring above five on the clinical frailty scale, or those with complex comorbidities likely to be difficult to manage outside an existing multispecialty hospital, should not be considered – among other exclusions.

The document says there are “significant challenges” in staffing for the project.

It says: “Blue light drivers are rare as the majority of the private ambulance service fleet made available is non blue light. At peak it is conceived that up to 60 additional critical care capable transfer ambulances will be required.

“Appropriately trained and qualified clinical staff able to facilitate critical care transfers are also a rare commodity. Their skill set is in high demand within their base hospitals as they expand ICU capacity as part of the surge and super surge plans.”

One intensive care consultant will cover 42 patients, and work in teams alongside three “intermediate doctors” (consultant, recently retired consultant, or an ST5+ in anaesthetics or with experience of ward rounds), and three further doctors (any specialty, ST2+).

On nurses, it says: “As the experience levels of nursing staff at the hospital will vary, some nurses are likely to be asked to perform tasks in ICU that they are unfamiliar with and are usually reserved for critical care nurses.”

The draft model says the acoustics of the Nightingale, which has been created at the Excel conference centre, are expected to make verbal communication difficult.

The number of ventilated patients with associated alarms, clinical teams that will not have worked together previously, staff filling roles and performing duties of which they have little or no experience, and staff working in a team structure that is novel and unfamiliar, means that “communications within the intensive care will require particular attention”.

Cerner’s Millennium is likely to be used as a patient management system, which will be present in the ops room and the admissions area. The document says this will provide real time bed status and allow pre-allocation of beds.