NHS leaders and former colleagues have paid emotional tributes to Clifford Mann, national clinical adviser for accident and emergency care, who passed away on Saturday.

The most senior figures in the health service were among those who praised Dr Mann’s “exceptional” clinical leadership, integrity and charm.

Dr Mann, who had cancer, died peacefully at home, with his wife Rhona and two daughters by his side. He had been looked after in his last few days by nurses from his own department at Musgrove Park Hospital, Taunton.

NHS England/Improvement chief executive Sir Simon Stevens said: “Cliff was an exceptional clinical leader, patient advocate, and source of wise advice, who stayed grounded in the pressurised realities of day-to-day emergency medicine while at the same time shaping and helping create a better future. His untimely death will be a huge blow to many people across the health service, and we will all miss him greatly.”

Charm, integrity and an OBE

Katherine Henderson, president of the Royal College of Emergency Medicine, said: “His passing is a huge loss to the NHS. Our thoughts are with his family and Taunton colleagues.

“His charm, integrity and way with a smile will be remembered forever.”

Dr Mann joined NHSE/I in 2016 and was latterly the service’s national clinical adviser for accident and emergency care.

Prior to joining NHSE/I he was president of the RCEM between 2013 and 2016, where he was credited with having played an integral part in helping the college secure its royal status and for significantly increasing its influence.

He was subsequently appointed an Officer of the Order of the British Empire, the ‘OBE’, in the 2018 New Year’s Honours list for services to emergency medicine. 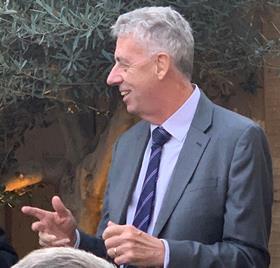 Mark England, a former colleague and friend, told HSJ: “He managed to be both the warmest, most personable person in any room, but also the sharpest. He was always dedicated to using evidence and improving care and leaves such a legacy.”

During the period in which he held a string of national roles he remained a prominent member of the emergency department staff at Musgrove Park Hospital, Somerset, where he had been a consultant since 1999.

He began his career in medicine in 1986, having trained at Charing Cross and Westminster in London. He also worked in Portsmouth, Plymouth, New Zealand and Australia before joining Musgrove Park.

In his NHSE/I role, Dr Mann played a key part in the development of new clinical standards for urgent and emergency care, which are currently the subject of a consultation by NHSE/I.

The organisation said Dr Mann had “spearheaded the rollout of same day emergency care – a new model of urgent care which continues to enable many thousands of patients to get the right tests and treatments quickly, reducing the need for people to be admitted to hospital”.

He was also clinical co-chair of the emergency medicine Getting It Right First Time programme designed to improve standards of care in A&E across the country.

Chris Moulton, a former RCEM vice president and Dr Mann’s partner on the GIRFT programme, told HSJ: “Cliff was undoubtedly one of the most outstanding medical leaders of his generation.

“He was forward-thinking, innovative and pragmatic. His ability to inspire people and to negotiate with politicians was second to none. But most of all, he was great company with a sparkling wit and a loyal and wonderful friend. I will miss him more than I can ever say.”

RCEM chief executive Gordon Miles said: “I found him an eloquent, wise, and warm man, an inspirational and insightful leader, a pleasure to work with. I know he was highly respected by his professional colleagues and was also held in warm esteem by all of us who work at RCEM. He combined professionalism with geniality and will be missed immensely.

“A father of two, but a father figure to many others, Cliff worked tirelessly as RCEM President to improve patient care, college processes and the working lives of clinicians. He leaves behind a legacy of excellence.”

Dr Mann loved spending time with his family in the idyllic village of Beer on the Devon coast when taking time away from work.

NHSE/I national director for emergency and elective care Pauline Phillip, said: “Losing Cliff will take a heavy toll on everyone who had the privilege to work with him across the NHS. He leaves behind a strong legacy which will inspire all of us to continue his work driving forward the transformation of emergency care for years to come.

“The thoughts of everyone at NHSE/I are with his family, his friends, and his frontline colleagues at Taunton and Somerset, at what will be an extraordinarily difficult time.”

And national medical director Stephen Powis said: “Cliff was revered among A&E staff, both as an outstanding medic, but also as a leader and mentor who passed on his skills, experience and – most importantly – focus on the quality of care patients receive in what is often the most worrying moments of their lives.

“He will be sorely missed as a colleague who, in all cases, would give the unvarnished view of frontline clinicians working in A&E, and it is exactly that candour and determination to improve patient care which enabled him to make such a difference, and which he will be remembered for.”