We must beat our hospital addiction

With social care facing a funding crisis that has profound implications for the NHS and local government, fresh thinking is needed, writes Lord Warner 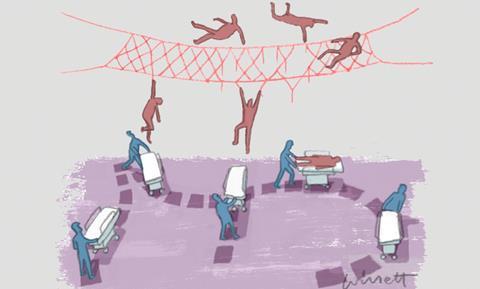 We should stop pretending that we can patch up the current funding system without much wider reform, which has to go wider than implementing the Dilnot Commission’s report.

Continued inertia on funding reform means the demise of good quality, publicly funded social care services and increasing demands on the NHS. Local authority eligibility criteria will be tightened even further so that only those in the severest and most critical need will get services and then probably at an insufficient level.

Service providers will continue to see their income dropping below their costs as local authorities cut their payments. Quality of care will deteriorate further as the quality and training of staff is sacrificed. Independent services – which are the major providers of social care – will stop investing in and providing publicly funded care. Private payers will get services; those that cannot pay will see their access to services diminish or even disappear. The NHS will end up coping with the social care casualties – probably at greater cost.

Nothing can stop the arithmetic of demography. The ageing and longevity of the population inexorably increases demand for adult social care. With more than a third of the adult population with long-term conditions, and often with multiple morbidities, the demands on health and social care services rise year by year. Yet we still pretend that the core business of the NHS is acute hospital treatment, when it is now community-based care involving care pathways that embrace health and social care and often housing and financial support. Yet our funding of health and social care is in separate silos with strong incentives to cost shunt and protect budgets, especially those of acute hospitals.

‘We still pretend that the core business of the NHS is acute hospital treatment, when it is now community-based care’

We have to begin treating the Department of Health departmental expenditure limit as a single budget to be spent in the most cost-effective way. We need to reimagine the whole system as a care system with a medical treatment adjunct rather than as a hospital treatment system with a care adjunct. We need new money flows and payment systems that reinforce such an approach rather than one that incentivises and reinforces episodes of care in acute hospitals and diverts money from overstretched community-based care systems.

This means radically changing political and public attitudes to acute hospitals. We need to reduce substantially the excessive number of 24/7 acute hospitals trying to provide a full range of medical specialties and concentrate those specialist services on fewer sites. The money saved could then be used to boost primary care and community health and social care services. We know from a recent study by the Institute of Fiscal Studies of Labour’s choice and competition agenda that people are not so devoted to their local hospitals that they will not travel further afield for a better treatment offer.

To progress matters we need a mechanism that has the prospect of some cross-party political support. My current thinking is an independent medical specialty led review of 24/7 acute services, under the aegis of the Academy of Medical Royal Colleges. I would ask them to see how these services could be reconfigured on fewer sites with the objective of safer specialist services that released £10bn over five years to create a new time-limited Care Development Fund. This fund would have independent ‘trustees’ whose mission would be the development of more community-based care services jointly by local authorities, clinical commissioning groups and health and wellbeing boards. So there would be no new NHS disorganisation – just better use being made of the new bodies.

Even with changes of this kind we still need major reform of the funding of social care to make it sustainable long term. People have to save more for their old age and use more of their own assets to pay for their social care, especially by equity release from housing assets. To do this we have to find a way of implementing a version of the Dilnot recommendations instead of sheltering behind the current fiscal difficulties of doing this. If we set the Dilnot cap on an individual’s lifetime care costs at £50 or £60k and implemented the Commission’s other recommendations it would cost £1bn a year or less to make a start. We could do this for three years by using underspends on NHS capital rather than repatriating them to the Treasury. That would give us the breathing space to find other funding sources, including subsidies from the Care Development Fund I am proposing.

We badly need some fresh thinking on stabilising the funding of adult social care during a period of fiscal austerity and increasing demographic service demands. I hope I can provoke some of this.