The number of people likely to have caught covid-19 in NHS hospitals in England has risen by more than a third in the last week.

The 35 per cent rise in probable hospital-acquired covid-19 from 6 to 13 December is the highest weekly increase since 30 October, HSJ analysis of NHS England data reveals.

Hospital-acquired infections are rising across areas such as London, the South East, and South West, and also at some hospitals in the North East, Yorkshire and the Midlands.

At some trusts, the weekly total of likely hospital-acquired covid-19 infections has more than doubled since last week.

HSJ analysed NHSE data which covers covid cases diagnosed eight or more days after the patient was admitted to hospital. Such cases were likely acquired in hospital, according to NHSE and international definitions. 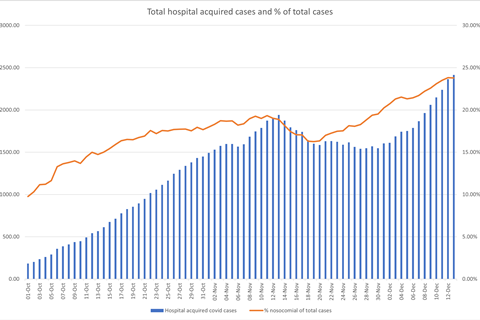 In the past week, almost one in four hospital covid-19 cases were likely to have been caught in hospital. There were a total of 10,150 covid cases in hospital, of which 2,414 were probably caught by patients in hospital while they were being treated for other illnesses.

Last week, to 6 December, there were 8,337 covid-19 cases in hospital, of which 1,787 were likely hospital-acquired. That means, in the latest week, the number of probable hospital-acquired infections rose by 35 per cent.

Over the past week, the number of likely hospital-acquired covid-19 cases doubled in trusts such as Barts Health Trust, where cases rose from 11 to 53, which was 18 per cent of the total cases at the hospital.

Hospital-acquired covid cases also doubled at South Tyneside and Sunderland Foundation Trust, where they jumped from 18 to 41, a third of its total cases, and Sheffield Teaching FT, where they increased from 16 to 38 — 31 per cent of cases at the trust.

Probable nosocomial cases also doubled in the past week at Bedfordshire Hospitals FT, where cases jumped from 13 to 37 — which was a third of its total cases — and at Brighton and Sussex FT, where they rose from 14 to 34, which is 41 per cent of cases at the trust.

Chris Morley, chief nurse at Sheffield Teaching Hospitals FT, said: “We have many measures in place to try to minimise the transmission of Covid-19. However with the continued higher prevalence of cases in Sheffield in recent weeks, we have seen an increase in asymptomatic patients which has meant we have seen a slight rise.

”We have a number of enhanced measures in place include frequent patient testing, twice weekly staff testing, increased physical barriers between patients in our assessment units and we are also introducing point of care testing in A&E.”