Covid infections caught in hospital up by half in a week

Covid-19 infections likely to have been caught in hospital have increased by almost half in a week with several trusts seeing significant rises, HSJ can reveal.

Our analysis of NHS England data shows that 3,813 covid cases in hospital in the week to 10 January were likely to have been hospital acquired.

Probable hospital-acquired covid cases in the latest week rose by 46 per cent on the week before, when 2,610 cases were detected, and by 52 per cent on the total on 20 December.

The rate of cases likely to be nosocomial was 15 per cent, down from the recent peak of nearly a quarter in mid December, however. It came as admissions from the community continued to soar during the third wave.

There have been significant rises in probable hospital-acquired covid at several acute trusts where rates have doubled or even tripled in the latest NHSE data. 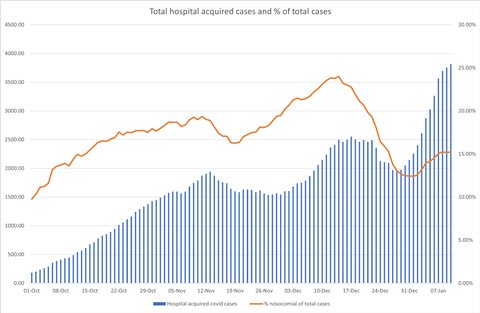 Nosocomial covid cases doubled at some trusts including King’s College Hospital FT, where hospital-caught cases rose from 46 in the week to 3 January to 92 in the latest week (13.2 per cent of cases), and at University Hospitals of Leicester Trust, where these cases rose from 30 to 61 in that time (22.2 per cent).

Mersey Care — a mental health and community trust — recorded 65 cases likely to be nosocomial in the week to 10 January, seemingly indicating substantial outbreaks among its facilities, up from just nine in the week to 3 January. It recorded three cases thought to be community-contracted. The trust said its rise was not due to taking on patients from acute trusts, but declined to comment further.

According to NHS England and international definitions, patients who first test positive for covid more than seven days after they were admitted are likely to have acquired the virus in hospital.

An NHS England spokeswoman said: “As the ONS has stated, hospital infection rates track covid cases in the community, and although nosocomial rates are now down to 7.7%, high community infections and crowded hospitals - in some cases with over half their beds occupied with covid patients - increases the risk, so the overriding goal has to be to bring community transmission back under control.

“Every hospital is asked to rigorously follow regularly updated PHE guidance on infection prevention and control and actually the number of outbreaks in hospitals has fallen according to most recent published PHE data, and the public can play their part too by following government hands, face, space guidance.”

HSJ has approached all the trusts named above for comment.

Updated 10:15am, 18 January to include comment from NHS England.