Thousands of hospital patients are being put at risk of developing deadly blood clots that cost the NHS hundreds of millions of pounds because of a failure to carry out a routine simple assessment.

Across England there has been a decline in the percentage of patients being assessed for their risk of developing a venous thromboembolism, or blood clot, which left untreated can travel to the lungs or brain and leave patients disabled or cause death.

The deteriorating picture follows years of effort by the NHS to improve VTE care after the introduction of mandatory data collection on assessments from 2010 and financial incentives in 2014-15. In percentage terms, the decline is around 1 per cent for the whole of England but this equates to tens of thousands of patients. A total of 3.7 million inpatients were admitted in quarter three of 2017-18, with 200,000 not being risk assessed for VTE.

The decline in assessment performance has caused concern within NHS Improvement with the issue being discussed at quality meetings.

HSJ’s analysis of monthly performance data for more than 150 hospitals from January 2016 to December 2017 period shows the NHS dipped below the target that 95 per cent of all inpatients should be assessed for their risk of VTE on at least three occasions in 2017. It remained above the target throughout 2016.

The national average also masks significant poor performance at regional and trust level (see box), with some hospitals never achieving the target during 2016 or 2017. In total, 39 NHS trusts had an average monthly performance over the two years below the 95 per cent target with eight trusts below 90 per cent – meaning more than 1 in 10 patients were not being assessed.

The South region had the worst average monthly performance of just under 95 per cent but the Midlands and East region had the largest number of NHS trusts below the target (13).

Beverley Hunt, consultant haematologist and medical director of the charity Thrombosis UK, was a leading figure in the campaign to improve VTE care 15 years ago.

She told HSJ she was “disappointed, dismayed and worried” about the decline in performance. She said: “It may mean that some patients aren’t getting appropriate thromboprophylaxis [proactive treatment with medication].

“If they are not getting that I am worried we are going to have a rise in rates of VTE and I’m very concerned that we aren’t preventing deaths due to VTE as well as we could do. We have to sit up and take notice.” 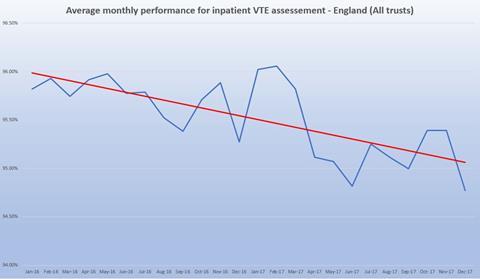 Each year VTE affects one in 1,000 people, with more than 60 per cent of all VTEs linked to hospital admissions.

Performance on VTE is an issue of cost as well as safety. The all party parliamentary thrombosis group has carried out a survey of clinical commissioning groups to determine what the estimated costs of treating VTEs are on the NHS. It revealed an average cost of £938,000, or almost £200m nationally. There was variation between CCGs, with South Lincolnshire reporting a £63,358 cost while Cambridgeshire and Peterborough reported costs of more than £7m.

NHS Resolution has also highlighted the risk of VTE clinical negligence claims with more than 123 cases between 2008 and 2014 costing the NHS more than £10m in legal costs and compensation.

Jo Jerrome, chief executive of Thrombosis UK, said the NHS was seeing a rise in admissions and pressure on the system but she warned: “It is imperative that a focus is kept on VTE. It saves lives and protects patients and prevents further burden on the NHS.

“This is a core element of patient safety. Patients might go in with something completely unrelated but suffer a blood clot. It is a low lying fruit with a simple process and protocol to follow. This one risk assessment can address two of the most important factors for an NHS trust – safety and cost.”

The bottom five performing NHS trusts for the percentage of inpatients assessed for their risk of developing a VTE were:

A spokeswoman for NHS Improvement emphasised that as a whole the national target of 95 per cent was being met but added: “We are working with providers to ensure that they are meeting this target on a consistent basis and that any variation is reduced to ensure patients are kept safe.”

A spokeswoman for Weston Area Health said: “We recognised we needed to improve and have worked hard to improve our data capture and increase the number of patients who are assessed for VTE risk. As a result of the work we have done, we have achieved the 95 per cent standard for quarter four [2017-18].”

Paul Stevens, medical director for East Kent Hospitals, said: “We have introduced a programme of work aimed at improving our recording of VTE risk assessment in the last two years and during this time we have seen significant improvement.” The trust told HSJ it is now achieving a 12-month average of 93.6 per cent.

A spokesman for Milton Keynes said increasing the number of VTE assessments was one of the hospital’s core objectives for 2018-19. He said: “We meet monthly with commissioners to discuss our performance in this area.”

In London, three trusts had a monthly average of below the 95 per cent target:

In the North, two trusts were below 90 per cent as an average monthly performance:

Kevin Phillips, chief medical officer at Hull and East Yorkshire, said: “This is a data recording issue and I would stress that we have strong evidence proving patient safety is not being adversely affected. While our recording rates of VTE assessment show us to be an outlier, the actual number of patients with VTE is in line with similar sized acute trusts.

“While our VTE assessment recording rates have improved to 89 per cent recently, we accept our rates have plateaued over the past few months and further action is required.

“An improvement team is now working with specific areas of our hospitals where our rates do not meet the 95 per cent standard to ensure our electronic recording rates continue to improve.”

A number of trusts were excluded from the data analysis due to mergers, which prevented consistent data from being available. Other trusts had IT issues that meant they did not report data for more than three months.