A major teaching hospital identified as an outlier for thoracic surgery by a clinical audit has stopped performing a surgical procedure.

Of the 31 cardiothoracic centres visited by the Getting It Right First Time team, King’s College Hospital Foundation Trust performed the lowest proportion of lung cancer resections for patients in stage one and two. 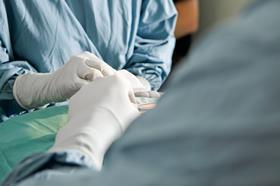 The GIRFT report said the national variation in treatment was ‘unacceptable’

The GIRFT report released in March described the national variation in the curative treatment, which ranged from 86.4 per cent to 37.5 per cent, as “unacceptable”.

King’s only performed procedures on 39 per cent of suitable patients, according to the National Lung Cancer Audit 2015, which was the latest available audit when the GIRFT report on cardiothoracic surgery was being prepared last year.

The report said providers were moving in the right direction on cardiothoracic surgery but problems remained.

A trust spokesman said King’s had “identified the apparently low rate of patients undergoing lung resection surgery for non-small cell lung cancer and undertook a detailed internal review to understand why this should be.

“Our review did not identify quality of care issues but did show that patients seen at King’s College Hospital differed from the national average in that at presentation they were older, had more comorbidities and poorer performance status compared to national samples. The lower rate of surgery related to the poor performance status and comorbidities of patients with early stage disease, such that the majority of these patients had palliative care as their definitive treatment.”

There is still a cardiothoracic surgeon at the trust’s Denmark Hill site but they do not do surgery, instead performing “diagnostic and palliative procedures”.

There has been significant centralisation of services since the 2015 audit was published.

The trust said there was a “fortnightly high risk multidisciplinary team meeting where all five consultants meet to review patients who have been assessed as unsuitable for surgery to see if surgical treatment may be an option”.

Leeds said the audit figures did not reflect the volume of work the trust did for the rest of west Yorkshire.

Deputy chief medical officer David Berridge said: “As a specialist centre, patients are referred into our service from across the region and many have particularly complex cancers so may not be suitable for certain types of treatments, including lung resections. To address this and ensure every patient receives individualised care, we also introduced a high risk MDT to discuss complex cases in more detail and make a plan for treatment.

“We are confident that we are providing safe and clinically appropriate care.”

The trust has six thoracic consultants working alongside a multidisciplinary team and provides stereotactic ablative radiotherapy, which can be an alternative to surgical resection.

A spokeswoman for South Tees Hospitals said: “These figures from 2015 do not account for the fact that as a specialist centre we provide this surgery for North Tees and for Darlington as well as for South Tees. If you combine the three areas this would place our cardiothoracic service in the middle of the table.

“They also do not take into account that we provide a very successful stereotactic radiotherapy service – these patients are not counted as patients radically treated in these figures.”

Norfolk and Norwich University Hospitals had not responded before this article was published.

David Richens, the cardiothoracic surgeon who led the GIRFT review, said although the UK was behind North America and Europe on resections, the situation was improving.

He said while the UK rate of 17 per cent for all stages resections was three percentage points below Europe and North America, it had improved from just 9 per cent five years ago.

However, the report pointed out that at three of England’s trauma centres, emergency thoracic cover was provided by cardiac surgeons.

Lung cancer is the second most common cancer after breast cancer.