The NHS recorded another record low against the four-hour target and a huge number of trolley waits for last month, according to the last major data release before next month’s election.

Performance against the overall target – which could be scrapped next year under proposals set out by NHS England – dropped to 83.6 per cent while the figure for major ‘type 1’ emergency departments fell to 74.5 per cent according to official NHS England data published today. A record low on both measures.

The previous low point against the overall four-hour target was recorded in April when performance fell to 85.1 per cent. The Nuffield Trust warned the next government “will immediately be faced with one of the bleakest winters in the NHS’s history”.

There were also a record number of trolley waits for a non-winter month. Some 726 patients waited longer than 12 hours after a decision to admit had been made. This was the fourth worst performance ever (see table: Ten worst months for trolley waits since August 2010).

Growing demand continues to be a major driver of deteriorating performance but this has also been exacerbated by other factors including the on-going pensions crisis which is restricting the number of shifts senior staff are prepared to do.

NHS Providers pointed out that the decline comes “on the back of an incredibly busy summer and record-breaking demand”.

”NHS staff have been working flat out all year round, but no matter how hard they work, the health and care system is not able to keep pace with the demands placed on it. This is pushing the dedication of NHS staff and exasperating already severe workforce challenges,” said the lobby group’s deputy chief Saffron Cordery.

Only one trust – Barnsley Hospital Foundation Trust – hit the target overall and for type 1. Northumbria Healthcare FT hit the overall target but not for type 1 (See below:Top ten performers against type 1 target).

The data excluded the 14 trusts which are part of a trial of new emergency metrics which could replace the four-hour standard from as early as April. They included Luton and Dunstable University Hospital, Kettering General Hospital and West Suffolk FTs and Imperial College Healthcare Trust.

The data means the NHS is heading into the election off the back of the worst ever four-hour performance since records began. The target was last hit in July 2015.

Elections are usually held in May or June - but the system was performing at a record low this spring. The chart below shows both spring and winter quarters for each election year since the four-hour target was introduced. 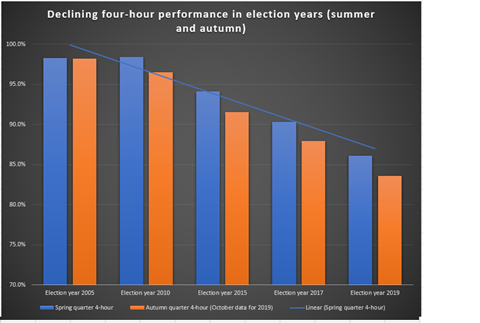 Ms Cordery added: “These performance figures paint a bleak picture for the health service as it approaches the busy winter months in a worse position than we have before.

“If we are going to turn this around we need the resources to meet this demand – that’s investment in facilities and equipment in hospitals and in the community, that’s investment in our existing staff, solving the pensions crisis forcing senior staff into retirement and protecting the ability for the service to recruit the staff it needs. But we need to be realistic about the time this will take.”

An NHS England statement said: “These figures show that while NHS staff are looking after a markedly higher number of older and sicker patients, a higher number of patients are being seen quickly than a year ago.

“While hospitals will be opening more beds over the coming weeks, the public also have a role to play going into winter, and can help doctors, nurses and other staff by getting their flu jab, and by using the NHS 111 phone or online service as a first port of call for non-emergencies.”