The chief executive of a trust building a new £350m hospital is “cautiously optimistic” that a new builder can be found soon to complete the construction after the liquidation of Carillion.

Toby Lewis, chief executive of Sandwell and West Birmingham Hospitals Trust, told HSJ that he hoped the “fog would clear” over the next few days as the trust’s private finance initiative provider searches for a company to finish the work. 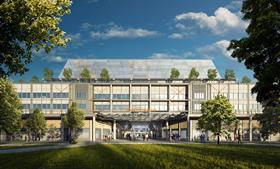 The trust is moving its acute services from two sites to the new Midland Metropolitan Hospital in Smethwick, which is financed through a version of PFI.

Mr Lewis said it was “regrettable” that Carillion’s liquidation would add to the six month delay in the hospital’s construction, after problems emerged with its mechanical and electrical design.

The project is two thirds complete with internal works yet to be carried out.

The hospital was one of two NHS capital projects cited among the factors behind Carillion’s profit warning last summer, which marked the first public sign of the company’s financial troubles.

Around 500 people are involved in the construction of Midland Metropolitan Hospital. Mr Lewis said most of the staff were employees at “dozens” of subcontracted firms.

Asked how many people had turned up to work on the site yesterday, Mr Lewis said he “hadn’t the faintest idea” but he was expecting the construction to be halted over the next few weeks while discussions are held with PFI provider the Hospital Company (Sandwell), accountants PwC and the Treasury.

He said: “From my point of view, what’s most important is that we get an agreed way forward.

“If that means that the cranes stand still for a few days, or even a few weeks, that’s not the most critical thing here.

“What’s most critical is that we can reset and be clear about when we’ll get over the finish line for the project.”

It is the responsibility of the PFI provider to find a new contractor to complete construction. The trust has contractual rights around which option is selected by the provider.

Mr Lewis said: “There’s no point pretending that employing a contractor to finish someone else’s work is easy but it’s hardly an unprecedent situation, so we’re cautiously optimistic that they will be able to make good on their obligation over the course of the next little while.”

A new subcontractor is also sought for maintenance of the hospital once it is operational.

Mr Lewis stressed the importance of the costs incurred by the delay not being borne by the NHS.

“I have a 35 year [PFI] contract and it makes clear that the cost of this circumstance is not borne by the trust or local NHS,” he said.

He added: “This project is at the heart of our sustainability and transformation partnership.

“There is no scenario where it is in the best interests of patients for this hospital not to be completed.”

Mr Lewis said the trust’s immediate concern is for Carillion staff affected by the company’s liquidation.

According to government data on PFI contracts, the Hospital Company (Sandwell) is a joint venture between Dukehill Developments, IUK Investments and Carillion. It is still registered at Carillion’s Wolverhampton address, according to Companies House.

Carillion was also involved in the construction of a £335m hospital in Liverpool.

On Monday Aidan Kehoe, chief executive of Royal Liverpool and Broadgreen University Hospitals Trust, said a new company will be set up that Carillion staff can be transferred to.

Carillion was subcontracted by PFI providers to operate services such as building maintenance, catering, cleaning, and portering at 13 NHS trusts, while three trusts also directly contracted with the company.

In total, 14 trusts have been affected by the company’s demise.