A teaching hospital where 10 patients suffered severe harm after the trust failed to keep track of their appointments has been criticised by NHS England.

A document released under the Freedom of Information Act reveals the national commissioning body had concerns about the process St George’s University Hospitals Foundation Trust is using to assess whether patients came to harm as a result of the trust losing track of their records. 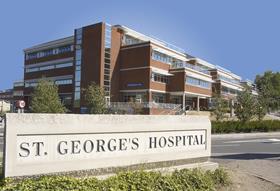 The trust is checking more than 2 million patient records

Minutes of meetings held by NHS England’s London specialised commissioning board last year said: “St George’s had not met the cancer 62 day standard in September and concern had been raised regarding the effectiveness of the clinical harm reviews. Medical directors are working closely with the trust to make improvements.”

The trust has a clinical harm review panel led by medical director Andy Rhodes that assesses whether patients have come to harm because of delayed treatment relating to the data problems.

The south London trust is undertaking a large validation exercise, checking more than 2 million patient records after realising the data was not being recorded properly.

It has not reported against the national referral to treatment target since May 2016.

The trust said last year there had been “some delay in completing the clinical harm reviews on cancer patients”.

This week, it said it had now “ensured additional resources are available to focus on this issue and the reviews are now being carried out on time”.

A spokesman added: “We are confident we have the right people and processes in place to ensure any cases of clinical harm are identified and investigated with any learnings shared across the organisation.

“We will continue to adapt our processes in response to feedback, and in line with examples of best practice from elsewhere – as we have done already.”

As of 19 January, there were 14 cases of harm identified by the trust’s clinical harm panel, 10 classed as severe and four as moderate.

Severe harm is defined by the National Reporting and Learning System as “any patient safety incident that appears to have resulted in permanent harm”.

When the issue first arose, non-executive director at the trust Sir Norman Williams, former president of the Royal College of Surgeons, asked the then chief executive whether the trust would face legal bills as a result. The trust has refused to answer questions on this subject.

Other trusts have also caused harm to patients after failing to keep track of their records.

The Royal Orthopaedic Hospital Trust in the west Midlands said it may have caused “severe” harm to four children as a result of delayed spinal surgery.