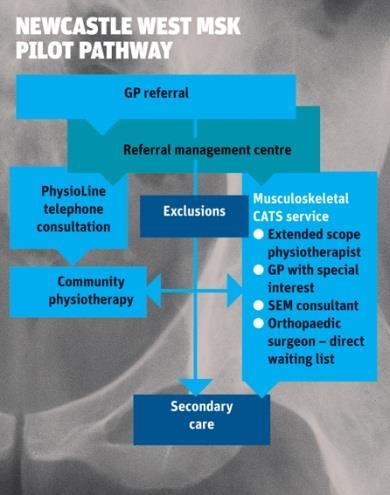 The fact that life expectancy will increase across the UK is of concern to healthcare provision in many specialities; arguably none more than in musculoskeletal care, which is already stretched to the limit in most parts of the UK.

In a two-year pilot since 2011, Newcastle West CCG has successfully tested the pathway described in the Department of Health’s 2006 musculoskeletal services framework document. It found that modernisation not only works well for patients, but GP-generated musculoskeletal costs were also reduced.

Results show the pilot service provided 62 per cent more episodes of care in 2012 compared with 2010, while still reducing overall expenditure. The pilot proved that there was more patient care, assessed as high quality and at less cost, which should make most CCGs sit up and take note.

Newcastle West CCG had invested in a community clinical assessment and treatment service in 2008, which tried to move musculoskeletal care into the community.

Historically, the patients in Newcastle had long waits for physiotherapy and GPs often bypassed this service and referred patients directly to secondary care. This was perceived to be the main source of high-quality care but was also the most expensive option, with low conversion rates to surgery.

By 2010 it had become apparent that while some GPs were using the service regularly, many still maintained the secondary care referral habit and orthopaedic and neurosurgical activity was little different. The CCG decided to pilot a new pathway as improvements needed to be made. The new model had to give GPs the confidence that high-quality care could be provided in the community.

The group commissioned the existing clinical assessment and treatment service provider Connect Physical Health to operate the whole community pathway for the pilot, as illustrated in the flow chart. Connect Physical Health approached Newcastle Hospitals to provide specialist consultant input for both upper and lower limb patients identified as potentially requiring surgery. These were seen by the consultant and if surgery was indicated they were added to the surgical waiting list at the Newcastle Hospitals.The main differences from the previous pathway were:

The service has been judged a huge success by the GPs at the nine practices involved. Dr Guy Pilkington, GP chair for Newcastle West CCG, says: “It is popular with patients and with GPs, the pilot has been shown to be responsive, high quality and cost-effective.

“The rapid community-based physiotherapy response has been highly valued, as has the expanded intermediate clinical assessment and treatment service using extended scope physiotherapists, secondary care consultants and a sports exercise medicine consultant,” he says. “The inclusion of secondary care consultants has helped fully integrate the pathway. The collaborative working of these specialists in community settings has been a major achievement and the sports exercise medicine consultant has been central in building these arrangements.”

A corresponding increase in community consultations occurred and notably a large increase in physiotherapy consultations, of which 15 per cent were telephone only. Overall there were 62 per cent more patient episodes in 2012, demonstrating that a large number of extra patients received care ranging from telephone advice early in their care through to traditional secondary care attendance.

Patients were not only seen in higher numbers, waiting times were significantly reduced, including less than 48 hours for physiotherapy telephone consultations, and an average wait of six days for face to face physiotherapy – which are both important in tackling problems early and reducing chronicity.

Quality was assessed using patient and GP feedback and health outcomes measuring tool EQ-5D on a cohort of patients from physiotherapy and clinical assessment and treatment services. A high level of satisfaction with the care received was recorded by patients and GPs, with 96 per cent of patients rating their care as ”excellent” or “very good” and 97 per cent  of GPs rating the service as “much better” or ”better” than in 2010.

Results also showed an improvement in physiotherapy patients which exceeded published results. However, patient returns were low, despite significant efforts to avoid this. The EQ-5D results for clinical assessment and treatment services demonstrated marginal improvement but a significant proportion of the small cohort who responded were still awaiting surgery at assessment, which will have affected the outcomes.

When national secondary care and locally negotiated community tariffs were applied to the modernised pathway shown in flow chart (above), the total patient care in a six-month period in 2012 was £42,000 less than the same period in 2010. This covered a small population size of 77,000, so in a typical CCG population of 200,000 there could be a saving of around £220,000 in a year.

Newcastle West CCG applied the guidance from the musculoskeletal framework in its two-year pilot and proved that more patients could be treated for lower overall costs using this model. Data gathered during the pilot showed quality of care had not suffered and the GPs were so positive that the pilot model has already been extended into this year, with plans to use the model more permanently.

‘Change can be difficult. The DH provided a framework in 2006 that should serve CCGs well in 2013’

Many NHS commissioners have found it difficult to implement the 2006 framework. This is perhaps due to difficulties for some in changing referral habits that have been established over many years, and also a lack of clear evidence that the model works. This study should go a long way to reassuring commissioners and individual GPs that pathway modernisation is possible and perhaps essential.

The large increase in physiotherapy attendance will raise issues for some. Self-referral to physiotherapy was not included in this pathway but it is certainly a proposed future modernisation. Inherently in reactive, high-quality physiotherapy services there are less GP consultations and further financial savings. In addition, there will be many extra uncalculated health-economic benefits of efficient early advice and treatment both to the NHS and employers.

Change can be difficult. The DH provided a framework in 2006 that should serve CCGs well in their challenges in 2013 and beyond. The Newcastle West pilot should give commissioners confidence to make those changes.

Dr Graeme Wilkes is a consultant in sport and exercise medicine and clinical lead for Connect Physical Health, a provider of community NHS musculoskeletal services