Exclusive: All trusts will buy new IT via NHS 'exemplars'

A consortium of Imperial College London, Harvard and Edinburgh universities will run a new academy to improve digital skills across the NHS.

Establishing the NHS Digital Academy was one of the key recommendations of Professor Bob Watcher’s review of NHS IT, with the American “digital doctor” highlighting a lack of digital skills, particularly at a senior level, in the health service. 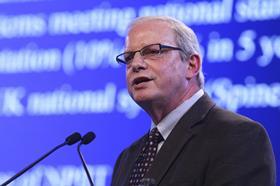 Professor Wachter called for more digital leadership at board level

“If the NHS is going to have world class IT systems we need a major programme to spread global best practice – and this links three of the best universities in the world to do just that,” he said.

The consortium will be expected to train 300 NHS staff over the next three years with each participant going on a 12 month course focused of digital skills.

It will be led by Rachel Dunscombe, digital director at Salford Royal Foundation Trust – one of the NHS’s “global digital exemplars” and another partner in the academy programme.

Matthew Swindells, NHS England’s director of operations and information, told HSJ the course will cover the use and deployment of specific technologies, how to handle data, information governance and security.

It will also cover the leadership skills required to ensure buy-in from staff and patients.

Much of the course work will be completed online but will include in-person elements as well.

Mr Hunt will announce the first cohort of students at the Health and Innovation Expo in September. Around half of the first 100 will be from the 23 global digital exemplar trusts, while the remaining places will be open to applicants from the wider NHS.

The initial funding for the academy is £6m over three years.

Mr Swindells said the intention was that after three years the academy would be self-funding, with NHS organisations paying to enrol staff.

Leveraging the prestige of the institutions involved, the consortium could eventually sell a version of the digital training programme internationally.

“We have an aspiration with the consortium to develop something that may be a joint venture, internationally marketable, that will generate revenues to fund the growth,” Mr Swindells said.

The course is still under development but the intention is for it be accredited with the Federation of Informatics Professionals and the Faculty of Clinical Informatics.

The Wachter review recommended that £42m was needed to train NHS staff in digital skills by 2020-21. The aim should be five clinically trained IT experts in an average sized trust, which would equate to roughly to 1,220 across all NHS providers, with the chief clinical information officer reporting directly to trust’s board.

Mr Swindells said progress had been made on digital clinical leadership since the Watcher review was published last year, such as the appointment of the first NHS chief clinical information officer Keith McNeil, and most trusts now had a CCIO.

“We’ve made good penetration across the NHS in there being chief clinical information officers. Getting them from being the ‘IT doc’ to being part of the strategic leadership of the organisation is still a journey we are on,” he added.

In its response to the most recent Caldicott review last month, the government said it would require all trusts to have a board level leader responsible for data security.

Mr Swindells said there was a “strong argument” for doing the same for digital leadership more broadly.

“I think we wouldn’t rule it out but I don’t think we’ve got to that point yet. You need to both build the capability and the expectation,” he said.

Applications for the academy will open in September.

Exclusive: All trusts will buy new IT via NHS 'exemplars'