Streamlining has helped the consultant team at North Bristol Trust cut the costs of total hip replacement surgery as well as improving the quality of care for patients. Julian Foote and colleagues explain how 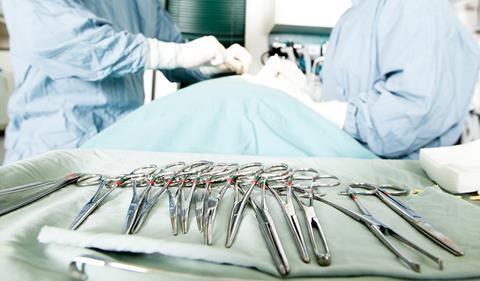 As the implants are about a third of the cost of a primary THR, an initiative to streamline the number of different types of prosthesis used by the trust was done to increase buying power.

This process was also in conjunction with a policy change, agreed by all consultants involved, to perform cemented THRs in patients over the age of 70.

As a result of these changes, a nominated lead consultant and management were able to achieve a 20 per cent reduction against previous spending on the implants used, which resulted in a year’s saving of £277,000 to the trust.

Within 12 months, hip replacement surgery was transformed from a loss of 22 per cent  per primary THR, to a profit of 8 per cent.

There are a number of different options that a surgeon can choose from when performing a THR surgery. These options include all cemented, hybrid, reverse hybrid, all uncemented and hip resurfacing procedures.

The costs of these combinations can differ widely, and there were 17 configurations prior to the trust’s new strategy with costs ranging from £761 per hip to £3,669. These different combinations were used in all age groups.

There is good evidence from the literature and national joint registry that cemented hip replacements in the over-70s group offer excellent results with low revision rates. These components are typically less expensive than uncemented options with harder bearing surfaces.

On this basis the consultant hip team at the trust decided on a policy of performing cemented hip replacements in this group of patients. The aim was 90 per cent compliance with 10 per cent leeway to accommodate other combinations in special circumstances.

An audit of data was carried out over a six month period in 2012 to assess compliance with the policy. Over this time period, 333 standard primary THRs were performed.

Compliance with the over-70s policy varied among the consultants from 38 per cent to 100 per cent. The lead consultant who performed 23 per cent of the total workload had a compliance of 89 per cent.

The actual cost to the department of all the components used during this time period was £178,214 and it could have been £144,687, if every patient over the age of 70 had received a cemented implant. If we had achieved 100 per cent compliance, instead of 76 per cent, the department could have saved £33,527.

These figures, however, need to be balanced against the potential cost of £253,824 (all hybrid with metal on polyethylene bearings) and £404,972 (all uncemented with ceramic on polyethylene bearings). If patients over 70 had received these combinations alone, they would have cost the department an extra £75,610 and £226,758 respectively, per six months.

The whole process was re-audited a year later, again over a six month period, to ensure compliance with the new process and continued best practice for the department. For this six month period, 339 standard primary THRs were performed.

Of these, 177 (52 per cent) were performed in patients over the age of 70. There was a dramatic improvement in compliance with cemented hips for these patients from 76 per cent to 87 per cent. Some 12 per cent received a hybrid hip replacement and 1 per cent an uncemented type.

Compliance among the individual consultants improved overall and the lead consultant compliance was maintained at 90 per cent.

‘Due to streamlining, the cost of the same standard cemented implant fell from £952 to £862’

Maintenance of the financial gains was also impressive.

The actual cost to the department of all the components used during this time period was £170,319, and it could have been £152,574 if every patient over 70 had received a cemented implant. If we had had 100 per cent compliance instead of 87 per cent, the department could have saved £17,745.

However, these figures again need to be balanced against the potential cost of £285,147 (all hybrid with metal on polyethylene bearings) and £376,833 (all uncemented with ceramic on polyethylene bearings). If patients over 70 had received these combinations alone, they would have cost the department an extra £114,828 and £206,514 respectively, per six months.

This re-audit highlighted a number of important factors. Having strong leadership within the department and setting an example has actually improved compliance in the medium term. This has led to a more cohesive unit and brought about excellent cost savings.

These savings have been achieved through a sound tendering process, which has been shown by this audit to reduce the costs of the implants, and a change in policy as to which implants to choose. The policy for patients over 70 to receive a cemented THR is based on robust evidence from the literature and they perform extremely well in this age group.

Obviously this cannot apply to all these patients as there will be occasions when different combinations need to be used. In these circumstances, implant choice is at the discretion of our surgeons to give their patients the most appropriate hip replacement. It is also why compliance was set at 90 per cent.

We have applied some of the solutions alluded to by the 2012 report Getting it Right First Time – with clear rewards as a result. By rationalising our approach we have been able to deliver a much more efficient and cost effective service that will ultimately benefit the rest of our department and trust.