How can the NHS reduce inpatient isolation and bolster emotional wellbeing during the pandemic and beyond?

An HSJ webinar, held in association with WiFi SPARK, brought together a panel to discuss how technology can enhance inpatient experience, increase human contact and reduce loneliness. Claire Read reports 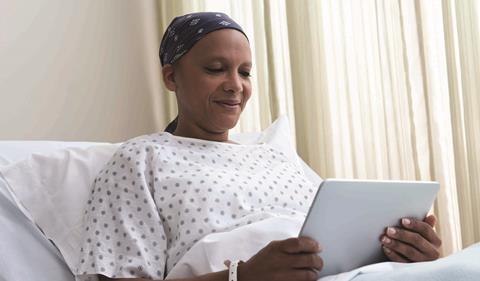 That NHS digitisation has accelerated in the face of the covid challenge has become a widely accepted truth. But, as Catherine Dale points out, it’s one that has generally focused on out-of-hospital settings – video consultations and the like.

Less widespread attention has been given to the application of technology in improving inpatient experience. “But actually the disruption to people visiting their loved ones has been an enormous challenge for healthcare, including for the clinical teams who have had to put additional things in place to keep in touch with families and loved ones.”

Ms Dale – patient safety and experience programme director at Health Innovation Network, which is the academic health science network for South London – was speaking at a recent HSJ webinar.

Held in association with WiFi SPARK, it attempted to explicitly focus on digitisation in the context of the experience of patients admitted to hospital. The main question on the agenda: how might technology help reduce inpatient isolation, bolstering emotional wellbeing?

At Buckinghamshire Healthcare Trust, it is an issue which has been given a lot of consideration. Visiting was severely restricted during the first phase of the pandemic and the volunteers who are normally an important part of improving patient experience in hospital had to stay at home – many are over 70 and so at high risk from covid.

It meant Amarjit Kaur, the trust’s head of patient experience and involvement, was quickly investigating possible applications of technology to increase human contact for those on the wards.

“We got a bunch of iPads and put Zoom and Skype on them and did virtual visits,” she said. “When we were very, very restricted on visits that made a big difference.

“We also introduced something called Letter to a Loved One – carers and relatives were able to email to a specific address and we would then print that off with photos in colour and deliver it straight to the patient. We delivered hundreds of those and I think it had a really big impact.”

“Tech has gone through a revolution with covid,” suggested Mike Bone, chief information officer at West Suffolk Foundation Trust. “[We gained the] ability to deliver things [for inpatients] that we had never actually been challenged with before – being able to deliver the connectivity required between patients and their families.”

To that end, the trust extended one of its existing pieces of call centre software to the patient advice and liaison service (PALS). “Anxious families could ring and get an update on how patients were doing, and that was open from seven in the morning until 10 at night, powered by our PALS team.”

As at Buckinghamshire, iPads were made available on wards. While the presence of such devices increased the possibilities for communication, there was an awareness that some patients would need support to capitalise on those opportunities.

“A couple of people on my team wrapped up in PPE actually went in with the units and therefore were able to make sure that the Skype or the FaceTime or the Teams actually worked; it connected to our hospital wi-fi correctly.”

West Suffolk’s network is supplied by WiFi SPARK, whose founder and chief executive Matt O’Donovan echoed the need for technology to be easily accessible to patients. He said his organisation has worked with NHS organisations widely during the pandemic, offering patient access to video conferencing and to online entertainment and newspapers, but that “having access to the wireless network is one thing; presenting the technology in a usable format to the patient is another”.

“We worked with one trust to very quickly provide a facility whereby patients could have access to video conferencing,” he reported. “Not everybody has a Zoom or Skype account, may not even have an email address, so we integrated a facility where all you need to do is put in a mobile number, a link is then sent to the recipient and a video call is set up.

“We have to make it as accessible as possible,” he emphasised. “The challenge is getting the technology delivery mechanism right and making it super simple for patients.”

And while covid may have made such matters more pressing, Ms Kaur is confident that – at Buckinghamshire at least – some of the changes introduced will persist even once something akin to pre-covid normality returns.

“We introduced iPads into each ward with the initial specific plan that they would be used for virtual visits, but what’s been really interesting is that we have been able to use those for multidisciplinary team appointments, also for preparing families for discharge,” she said.

“Even before covid, there were issues of getting everybody together in a room at the same time – family members, patients, clinicians – so using the iPads is actually something that we’ll continue to do well beyond this period, because actually there have been some real benefits to it.”

For Catherine Dale, the increased access inpatients have to tablet computers offers benefits beyond improved connection to the outside world.

“Sometimes the NHS isn’t as good as it could be at informing people about what’s going on; letting people know what the plans are and how long they’re expected to stay,” suggested Ms Dale, patient safety and experience programme director at Health Innovation Network, which is the academic health science network for South London.

“Some of that, I think, has [traditionally] been picked up by visitors coming in or contacting people [in the clinical team], but actually giving people an overview of what is collectively known by the clinical team about their care is something that I think needs a bit more attention.

“There is definitely a role for digital support to enhance that,” she contended. “We are moving towards better access to patient records, but much of that is probably in an outpatient setting. A patient on a ward having access to the information about what’s going on with their care [would be really powerful].”