The government is poised to agree several major deals with private firms to unlock capital funds worth £5.7bn by selling NHS land and property.

Several sources confirmed to HSJ that in response to the Naylor report on the NHS estate, six regional public/private partnerships will be created under the plan to dispose of assets that are no longer required or not fit for purpose. 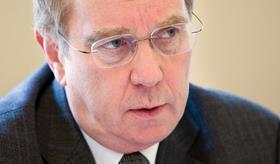 The plan is named Project Phoenix. Under the PPP deals it is likely the profit from sales would be shared between the NHS and the private partners – though how the cash would be split has yet to be revealed.

One source with knowledge of the project said the arrangements could involve using private funding to achieve the best market price for the sales, for example by converting, renovating or demolishing existing buildings, or securing planning permission. This would maximise the price for the sale without needing upfront public investment.

The project is part of the response to the report on NHS estates by Sir Robert Naylor, who said the service should adopt “a far more commercial approach” to managing its assets in order to release much-needed funds.

HSJ has learned a business case has been presented to the Department of Health and discussions are underway between senior policymakers before final proposals are presented to ministers.

However, one source said a final decision on the project has not been made.

The project is expected to require Treasury sign-off before tenders for the partnerships are published in the Official Journal of the European Union.

HSJ understands an announcement unveiling Project Phoenix had been anticipated for shortly after the general election after the Conservative manifesto pledged “the most ambitious programme of investment in buildings and technology the NHS has ever seen”. Theresa May also confirmed £10bn of funding would be available in an interview with the BBC during the campaign.

However, the announcement could now be delayed as the Conservatives attempt to form a minority government with the support of the Democratic Unionist Party.

The DH is believed to have originally tasked Community Health Partnerships with developing a new PPP model in response to Five Year Forward View and the project gathered pace as the findings of the Naylor report became clear.

Under the proposals, six regional PPPs would be set up covering the North East, North West, South East, South West and two in the Midlands.

HSJ has been told London was initially considered a separate PPP but is now more likely to be included in the South East deal.

The Naylor report was commissioned by the DH to review the NHS estate, release £2bn of assets for reinvestment and deliver land for 26,000 new homes.

Sir Robert, the former chief executive of University College London Hospitals Foundation Trust, said £5.7bn could be generated if trusts maximised the value of land and buildings before putting them on the market.

It is anticipated the PPPs would attract the private sector investment required to achieve that aim.

The NHS’s share of the receipts would be put into local health economies to fund service or hospital reconfiguration, new builds or clearing the mounting maintenance backlog.

Under partnership agreements, NHS organisations would also be able to tap into estate management expertise from the private sector. Tackling the “lack of strategic estates skills” was identified as a key priority in the Naylor report.

How the new PPPs would align with the 49 LIFT companies — local joint ventures between CHP and the private sector to develop community facilities – or how NHS organisations will participate in the project are still to be confirmed.

However, action taken by the PPPs would be expected to match and support proposals set out in sustainability and transformation plans.

One source said: “This is an exciting opportunity and the Naylor report was absolutely spot on.

“We can’t possibly do all that needs to be done within NHS funding. We have to bring in private sector investment and that level of expertise.”