1
Survey: are we truly going paperless? 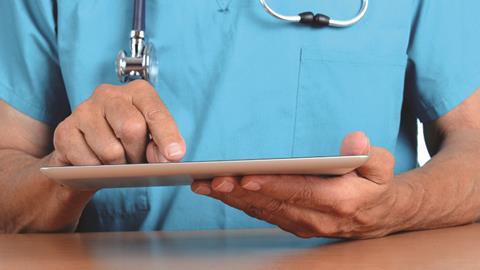 An HSJ survey captures the progress of the digital revolution in the NHS and takes a close look at what is really lacking. By Claire Read

The post-speech headlines may have been grabbed by a pledge to introduce Ofsted-style ratings for clinical commissioning groups.

The lecture’s focus was very explicitly elsewhere, however: on the secretary of state’s vision for a digital NHS in which patients are empowered through technology.

It is a vision that has been most clearly embodied in Mr Hunt’s desire for the health service to be paperless by 2018.

He first announced the ambition in January 2013, and for each of the three following years HSJ has surveyed healthcare leaders to get a sense of the progress being made.

This year’s survey, run in association with BoardPad, suggests continuing doubts about making the vision a reality.

Nineteen senior leaders from provider trusts – seven of them chief executives – told HSJ they felt the 2018 paperless timeframe was unrealistic, even with its nature slightly revised by the National Information Board’s report Personalised Health and Care 2020.

That document states clinicians in primary, urgent and emergency care will be operating without the use of paper records by 2018, stating all care records will be digital, real time and interoperable by 2020.

Those we surveyed did not have much more confidence the 2020 target was realistic, however. Just two felt it was within the NHS’s reach.

Eleven felt it was possible but challenging. The same number felt 2020 was not realistic but that a paperless NHS could be achieved within five years of 2020.

Our survey respondents were generally more confident when it came to progress within their own organisations. 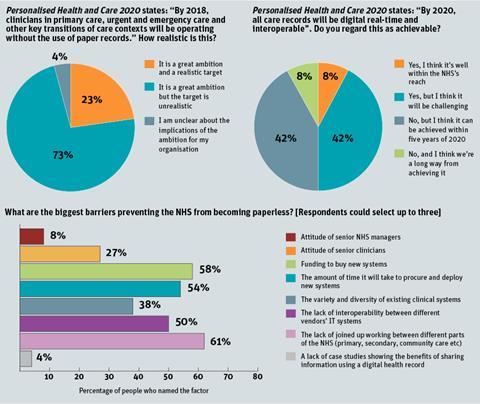 Three reported their trusts already had a fully digitised patient record system in place – interestingly, all were mental health trusts.

Five said they hoped to have such a system in place within two years, and another eight said they expected to be fully digital by 2018.

Notably, none of the senior leaders we surveyed said they had not yet begun the journey to paperless. But eight confessed they did not expect to have a fully digitised system by 2018.

Mr Hunt himself seemed to acknowledge the scale of the challenge during the annual lecture, admitting he had “perhaps foolishly” said he wanted a paperless NHS by 2018.

He expressed confidence that the spirit of the ambition remained alive and well, however, “not least thanks to the inspirational leadership of Tim Kelsey and his team”.

With Mr Kelsey having left NHS England last month to take up a role in Australia, the specific inspirational leadership to which the secretary of state referred is of course no longer available.

The leaders we surveyed were divided on the potential impact of this personnel change to the paperless NHS.

Eleven did not feel Mr Kelsey’s departure would have any impact on the scale of the national impetus for a digitised health service. Fourteen felt it would have an impact to some extent.

One individual, a chief executive at an acute trust, stated Mr Kelsey’s departure would reduce national impetus “to a great extent”.

Many of Mr Kelsey’s speeches in his final few months as national director for patients and information were centred on the development of local digital roadmaps.

By April, all CCGs are expected to have developed such documents, outlining how areas plan to “eradicate the use of paper in the treatment of patients across all health and care services… by 2020”.

Just two of our leaders said their local roadmaps were progressing well and had confidence the April deadline would be met easily. Nine reported reasonable progress and believed they would meet the deadline. Seven expressed real concern about completion by April.

One of the first decisions required on the roadmaps will have been which area to cover. NHS England has stated the plans can cover either a single CCG area, or multiple areas. Six of the respondents to our survey said their area had adopted for a one-CCG approach. Nine reported their digital roadmap would cover two or more CCGs.

Challenges in progressing the roadmap were equally varied. Insufficient guidance and support, competing urgent priorities, and challenges in getting all relevant parties to agree on a plan were all mentioned.

“The barriers are predominantly cultural rather than technical”

So too was lack of expertise. Said one finance director at a mental health trust: “There is insufficient experience of planning and managing projects of this scale within the local health economy.”

In common with the first two editions of this annual progress to paperless survey, lacking knowledge was a concern more broadly.

Sixteen of the senior leaders we surveyed felt the NHS leadership community had insufficient knowledge of the potential efficiency and patient outcome benefits IT can offer. A clear majority felt this lack of knowledge could undermine the ambition for a paperless NHS.

It is interesting to note a majority also believed organisations should be judged on levels of digitisation.

Eighteen respondents described as “helpful” the Care Quality Commission’s plans to take provider trusts’ digital maturity into account as part of the inspection regime. Eleven said they were already aware of their own trust’s digital maturity index key indicators.

There was a simultaneous belief in the need to look beyond individual organisations, however. The most commonly named barrier to greater digitisation was the lack of joined up working.

“The barriers are predominantly cultural rather than technical,” suggested one chief information officer in a mental health trust.

“Interoperability requires a focus on the patient/citizen at a pan-organisational level, which is not easy when all our targets are at the organisation level. We need to put away our trust badges and wear our NHS ones.”