The controversial closure of a small hospital’s emergency department at night has resulted in an average of just two patients a night needing to be transported to an alternative A&E during the first six weeks, trust managers have reported.

United Lincolnshire Hospitals Trust forecast closing Grantham and District Hospital’s A&E between 6:30pm to 9:00am, which begun in August and will run until at least November, would reduce admissions from 14 to eight a day. 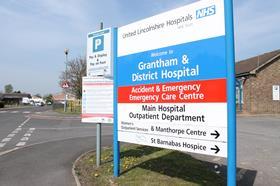 The Grantham A&E has been closed at night since August

However, a paper for its board meeting today said during the first six weeks of the new arrangement daily average admissions to Grantham had been around “12 compared to a previous average admission rate of 14. This suggests a daily reduction of two admissions a day. This is less than the six predicted.”

The trust said it took the decision the carry out the experiment in August because services had hit “crisis point” resulting from a lack of doctors to fill shifts across its three hospitals. Patient safety was being put at risk, the trust said.

Average attendances during the six weeks between 16 August and 27 September were around 60 per day. This is 20 less than the 80 per day arriving at the A&E before, but trust managers had predicted there would be a 25 patient reduction.

The trust said attendances at its other two sites, the Lincoln and Pilgrim hospitals “remain within normal variation. However Lincoln has seen a spike in general attendances since 12th September. There is no evidence to suggest that this is caused by patients from the Grantham area.”

Trust chief operating officer Mark Brassington told HSJ he was “pleased that we have managed to reduce the predicted impact on Grantham patients requiring admission and we are looking for ways to further improve this”.

He added: “At the time of planning the change we anticipated that this change would impact on approximately six patients per night having to be transported away from Grantham to an alternative emergency department.

“Information to date suggests that this on average has affected two patients per night. We are pleased that we have managed to reduce the predicted impact on Grantham patients requiring admission and we are looking for ways to further improve this”.

Dr Hassan added: “The trust is working hard to fill posts and is certainly heading in the right direction with aspects of system design – it is encouraging that Grantham has opened a walk-in clinic in the evenings.

“But the nationwide shortage of ED doctors is having a significant impact on service delivery especially in places like Grantham. Inadequate numbers of doctors available to work results in an adverse impact on patient care.”

He added: “An under-resourced system is struggling to cope with demand. The college is extremely concerned about the impact that winter will have on services.”

Board paper and information provided to HSJ