Wireless brings night-time care out of the dark ages

Dominick Shaw explains how doctors’ use of wireless technology has enhanced out of hours care at Nottingham City Hospital, with benefits for safety, staff and costs 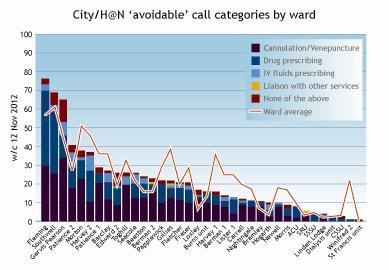 Nottingham University Hospitals Trust is one of the largest hospital trusts in the UK, employing 13,000 staff across the City campus and Queen’s Medical campus. We have 1,700 beds across 87 wards across an area of 46 hectares. The City campus, the focus of the initial project, consists of many separate buildings interconnected by long corridors. At roughly 1km across, it takes 15 minutes to walk from one end of the campus to the other.

‘The Hospital at Night system was neither safe nor efficient. Many of the issues were due to poor communication’

Like most UK hospitals, we introduced the Hospital at Night programme in 2006 to meet the demands of the European working time directive. This reduced doctors’ hours from around 56 to 48 hours per week, and imposed a shift limit of 12 hours. Consequently, fewer doctors are available out of hours, despite an annual 15 per cent increase in admissions.

The Hospital at Night service manages clinical activity from 5pm-9am weekdays, and all day during weekends and public holidays. This accounts for 75 per cent of the entire working week.

While there are fewer elective procedures in these hours, medical patients typically need the same level of care as in core hours, and emergency admissions still occur.

Problems with Hospital at Night

The staffing levels are lower during out of hours care, with one senior nurse coordinator, one registrar, four junior doctors and one clinical support worker managing the clinical needs of the City campus.

The City Hospital accepts admissions for respiratory conditions, stroke, infectious diseases, oncology, haematology and cardiology, as well as general surgery, through an admissions ward, and also direct to specialty.

Under Hospital at Night, a ward nurse would contact a coordinator when they needed clinical assistance or a patient task performing. The coordinator would speak to the ward and pass the request on to a doctor. To do this the coordinator had to bleep the relevant doctor and wait for the doctor to call back in order to assign the task. They rarely left the office because of the number of calls and the need to enter data in real time.

It became apparent that the system was neither safe nor efficient. Two reports highlighted problems with continuity of care, patient safety and staff dissatisfaction. I was appointed medical lead for the programme and efforts were made to improve nurse coordinator recruitment.

Many of the issues were due to poor communication. The ward nurses were never sure if a doctor was going to attend the job they had phoned through so repeat requests were made. The coordinator’s phone was constantly engaged and the junior doctors and ward nurses could not get through. The answering of pagers disrupted junior doctors’ work, annoyed patients and exacerbated poor handover.

‘We now plan our junior doctor provision around our workload, rather than vice versa’

At busy times, the coordinator would receive 15 or more bleeps at a time. The bleep unit could only store the last 10 numbers, so numbers often got lost. Since they all appeared equal, the coordinator had no way of knowing which were urgent, so they could not prioritise them. These factors caused delays and directly resulted in at least two serious untoward incidents.

In September 2010, we started working with ICT services on identifying how technology could help to solve the problem. The hospital had just finished deploying the Cisco Medical-Grade Network, which combined hospital-wide wireless connectivity with mobile devices such as Cisco wireless phones, Blackberrys and Cisco Cius tablets.

Andrew Fearn, director of ICT services, had identified an organisation, Nervecentre Software, which provided a real time workforce management system that operated closely with the Cisco network. The system was then designed to meet the requirements of the Hospital at Night team by Nervecentre, then involved lead nurse coordinator Debbie Guy and myself.

The system is simple. A nurse enters a task, such as IV fluid prescription, on their ward PC from a desktop icon. They are prompted to enter data on the patient using a form based on the NHS Institute for Innovation and Improvement’s Situation, Background, Assessment, Recommendation tool. This ensures a consistent and accurate set of information is captured for every request and grades the task as red, amber or green depending upon urgency.

Once submitted, the Nervecentre program sends the request wirelessly to a coordinator carrying a tablet device. The coordinator sees straight away the information entered by the ward nurse including the priority, location and details of the request. The coordinator then selects the job and a list of doctors on shift is shown, as well as how busy they are.

The coordinator selects a junior doctor and the information is sent directly to their mobile device. The doctor can then accept or reject the job. Once completed, the doctor clicks “complete” on their phone and the job is removed. Rejected jobs go back to the coordinator for allocation to another doctor.

‘Wireless working for out of hours care has major safety, cost, training and staff satisfaction benefits’

The new system was successfully introduced in four weeks, including all junior doctors, ward nurses, nurse coordinators and clinical support workers, from the ground up.

We started with the nurse coordinators and the area of lowest risk, the support workers. They rapidly took to the technology. The junior doctors followed and then the medical registrars. Explanation of the technology took five minutes and was part of the evening Hospital at Night handover meeting.

There have been no negative comments from the junior doctors. We designed the system to send a log of all jobs performed by the doctors to their work email. They can then use this log to populate their mandatory online work portfolio. This ensures that junior doctors read their hospital emails, which helps them with their training.

The consultants have got used to their juniors checking their mobile phones on the ward rounds. They now appreciate the doctors are actually working rather than playing Angry Birds. No phones have gone missing either.

There are several other benefits from the system, which fall into two categories: communication and data.

The improved communication has helped in several areas. The automatic copying of urgent jobs to the medical registrar has meant patient care gets escalated more quickly and appropriately. Consequently, the most junior doctors feel more supported.

Information governance has improved. Jobs are no longer recorded on paper handover sheets, but are held securely on the mobile device. This has two effects: first, it reduces the effects of “Chinese whispers” and data degradation with handover. Second, it reduces the chance of patient identifiable data leaving the trust.

Job satisfaction has also improved. Our system has been assessed by the Association of Certified Chartered Accountants. Their report showed a massive improvement in staff satisfaction. Coordinators are no longer tied to their desk; they are mobile with the tablet. They are able to spend around 60 per cent of their shift providing direct clinical care on the wards, putting about 8,000 hours a year back into direct service delivery. Ward nurses particularly like the reduction in delays and the simplicity of raising a request.

The ACCA report also documents major cost savings due to staff redeployment, reduction in work duplication and reduced length of stay. The cost of the system was initially met by the Nottingham ICT department but it is available commercially from Nervecentre.

The most important aspect of our system has been the accrual of data about our service. We now know how much work is requested out of hours, where it occurs, how long it takes to process, how much should have been completed in the day, variation in ward requests, number of requests by specialty, average number of jobs performed by each grade of staff and the urgency of each job.

This has several advantages. We now plan our junior doctor provision around our workload, rather than vice-versa, and we are able to target reducing the number of jobs left by the day team.

Wireless working for out of hours care has major safety, cost, training and staff satisfaction benefits. Perhaps more importantly, it tells us about how our system works and helps us identifiy shortcomings in how we provide care.

Dr Dominick Shaw is the associate professor and medical lead for Hospital at Night at Nottingham City Hospital, dominic.shaw@nottingham.ac.uk