Here is a photograph that I took and tweeted on 3 January 2018, a day when 14 ambulances were queued up outside the Wrightington, Wigan and Leigh accident and emergency department. It had not been my intention to create a news story but the picture was picked up by many of the national media and featured as the first item on BBC TV news that evening as symbolising the strains on the NHS. 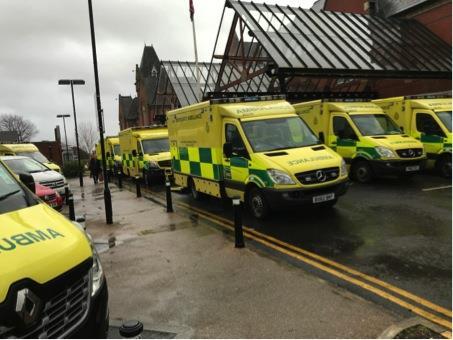 What the picture could not show is what was happening inside the hospital and had indeed been happening for several weeks. Every bed in the hospital was full so that new patients could only be admitted once an existing patient was discharged.

Under these circumstances flow through the hospital seizes up and the unfortunate patient experiences long delays. The government target is that 95 per cent of patients should be seen and treated within four hours of arrival. On several days, we achieved this for less than 50 per cent of patients. The least urgent patients could sometimes wait for as much as 12 hours to see a doctor.

This is obviously bad for patients but it is also profoundly exhausting, upsetting and stressful for staff. Apart from the sheer relentless weight of work, staff grow increasingly anxious that these delays put patients at enhanced risk because later diagnosis results in a later start of treatment.

It is incredibly difficult for people to carry on working when under continuous pressure, therefore, it is not surprising then that staff in such circumstances may experience burnout and have a higher than average sickness rates

The patient’s condition can worsen within what appears to be the safety of a hospital and staff are profoundly aware of the risk, especially when patients are in unsupervised waiting areas.

A good definition of stress is the emotional tension that results from the anxiety of feeling responsible for an outcome but not being able to control that outcome. So a very busy A&E department is a place of enormous stress.

It is incredibly difficult for people to carry on working when under continuous pressure, therefore, it is not surprising then that staff in such circumstances may experience burnout and have a higher than average sickness rates. Their absence, in turn, inflicts even greater stress on those who do come to work and it is remarkable really that almost all staff do still come in to work, day in, day out, despite knowing what to expect.

Although this article concentrates mainly on the A&E department, there is a very similar position on the wards with relentless pressures to discharge patients as soon as they are safe to go.

What then, can we do to reduce and manage that stress? The first thing is to acknowledge the problem and take it seriously.

One of our main objectives is to maintain a positive and healthy culture and particular priorities are to stamp out anything that looks like blame. When things are tough it is far too easy to find someone to blame but this is deeply corrosive to teamwork and relationships.

There are numerous instances of individuals arriving early, staying late and generally going the extra mile. It is important to recognise these invaluable contributions and to constantly and routinely thank staff

Poor relationships are also a cause of stress. On the flip side, good teamwork helps create good support at work, which helps build resilience against stress. Another way of generating positive energy is to look for and acknowledge successes, even small ones.

There are numerous instances of individuals arriving early, staying late and generally going the extra mile. It is important to recognise these invaluable contributions and to constantly and routinely thank staff.

It is also important as an employer to show that you are concerned about staff welfare so it is vital to have a regular, senior presence on the “shop floor”. This also creates the opportunity to listen to staff and ask for their suggestions on what can be done to improve the situation and to improve their health and wellbeing at work.

For some time, we have offered practical help such as hand massages, weight loss clubs and classes in mindfulness but this winter we have wanted to find new ways to demonstrate our appreciation and support. We announced a Winter Wellbeing package consisting of mostly quite small things but, that put together, can make a real difference:

Perhaps it is the sheer quantity of actions and offers but this appears to have had a genuine positive impact on staff. Our annual national staff survey was conducted over October and November and, despite all the pressures, responses to two thirds of the questions either improved or stayed the same compared to the previous year.