Brexit is only partly to blame for the nursing shortfall

The fears about Brexit reducing the flow of nurses from the EU are justified but the other half of the picture is that we have been reliant for too long on overseas staff, write Anita Charlesworth and Professor Jim Buchan

The UK is facing a shortage of nurses, and over recent years the NHS has relied on international recruitment – particularly from the EU – to plug the gap.

One of the main areas of concern about Brexit is the potential impact on the flow of nurses from the EU. New Nursing and Midwifery Council data suggests these concerns are well founded – since the referendum the number of EU nurses registering to work in the UK has collapsed.

In April this year, just 46 EU nurses registered to be eligible to work in the UK, compared with an average of almost 1,000 per month in the first half of 2016 (see figure 1). This has not been a trend of gradual decline, but rather a crash within the space of a couple of months after July 2016. 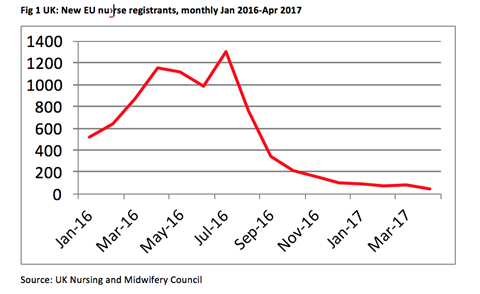 While we cannot attribute causality, the Brexit vote came in late June 2016. It appears that the vote to leave led to an immediate, deep and potentially lasting drop in the number of EU nurses who would consider working in the UK.

If this was the only UK nurse supply challenge facing NHS policy makers and planners, it would be a major headache, with 30,000 UK based NHS nurses coming from the EU. But the real cause for concern is that this Brexit impact only adds to existing supply problems.

The obvious supply side “solution” to the drop in EU nurse registrants is to train more nurses in the UK. But it takes three academic years before a new student nurse enters the workforce, so there is a time lag to consider.

Nurse training places were cut by over 10 per cent at the beginning of the decade. This decision has come back to bite the service, and modelling by Health Education England projects a shortfall of nurses annually up to 2020. The government now aims to expand places but at a lower cost to the public purse. 2017 is the first year of the new funding model replacing bursaries with student loans in England.

UCAS data shows a significant reduction in the number of applicants for pre registration nurse education in England this year, notably among mature applicants. There has been a drop in applications across the UK but it’s less pronounced in the parts of the UK where bursaries have been retained.

Even so, there are more applicants for nurse education than training places – holding out the potential for expansion. The underlying problem is that, irrespective of funding model, the UK trains relatively few nurses. The most recent OECD data shows that, in 2014, the UK had only 29 nurses graduating per 1,000 population – compared to 39 in France, 63 in the USA and 73 in Norway.

Another option is to continue international recruitment, but aim beyond the EU. The number, and source, of international nurse recruits to the UK’s health services has varied over time, but in recent years, until 2016, had grown rapidly, driven by a huge increase in the inflow of EU nurses (see figure 2). 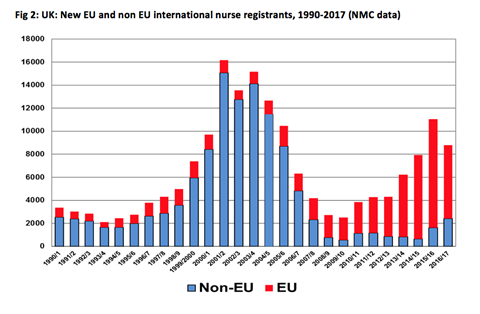 In the last decade Portugal, Spain, Italy and Romania have replaced the traditional source countries of India and the Philippines. The scope to switch back to recruiting from these non-EU sources is constrained by UK general immigration policies, and continuing obligations for the NHS to avoid active international recruitment of health professionals from designated low income countries. The growth in non-EU nurse inflow in 2016-17 has not compensated for the reduction in EU nurses in the same year.

What are the other possible supply side solutions? One option is to hold on to more of the nurses already working in the NHS by improving retention. The limited data on turnover and retention shows no promise of any marked improvements. The NHS pay freeze, now entering its seventh year, can only be exacerbating retention challenges; so too the recent marked reduction in funding for in-service training.

There is also the option of attracting back people with nursing qualifications who are not currently active in the profession. HEE recruited about 2,000 potential returners to their refresher courses between 2014 and 2016, less than arrived from Spain in the same period.

Where does this leave us? Brexit is likely to further exacerbate worsening nurse supply problems, but it is not the major cause. We hear repeatedly about poor workforce planning in the NHS in England – and there is no silver bullet policy. Ensuring the NHS has access to enough high quality nursing staff will require sustained action across all the supply-side policies.

But in reality the only way to have effective workforce planning is if that plan is supported by specific funding and aligned to the long-term strategy of the NHS.

We need an approach to NHS workforce sustainability that drops the short termism and reactive reliance on international sources. We must take more responsibility for meeting our workforce requirements from our own resources.