Some DGH chiefs paid more than CEOs at largest trusts

Fifteen trust chief executives were paid at yearly rates of more than £250,000 last year, including several in the north east running district general hospitals, according to HSJ analysis.

Ian Renwick, the former chief executive of Gateshead Foundation Trust, was paid £265,000 in 2017-18, which represented 0.1 per cent of his trust’s turnover. He was sacked earlier this year, the details of the reasons for this are not known. Alan Foster was also paid £255,000 by North Tees and Hartlepool FT last year (0.09 per cent).

All four received more than the chief executives of some of the largest trusts in the country.

The NHS trusts in the north east and north Cumbria defended their chief executive salaries, saying in a joint statement: “The salaries of our chief executives and executive leadership teams are decided by independent nominations and remuneration committees and this is to ensure they are in line with publicly available salary benchmarking information.”

They said the region “consistently performs amongst the best in the NHS against national standards”, despite growing demands and “very challenging health inequalities which exist for people living in this part of the country”.

The salaries help retain the best healthcare leaders in the region, the statement added.

Click the button in the top left hand corner to enlarge 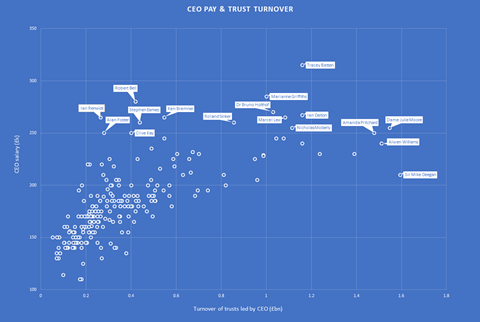 Other standout salaries, in terms of proportion of turnover, were Robert Bell, of Royal Brompton and Harefield FT, and Clive Kay, of Bradford Teaching Hospitals FT (see table below).

Only four of the 15 highest paid chief executives were women – and they all ran trusts with turnovers of more than £1bn. However, the two most highly paid chief executives were women – Tracey Batten at Imperial College Healthcare Trust and Healthcare Trust and Marianne Griffiths who runs both Western Sussex Hospitals FT and Brighton and Sussex University Hospitals Trust. Ms Batten was paid the equivalent of £315,000 a year and Ms Griffiths £285,000 including a bonus.

It was a similar picture for finance directors and board level chief financial officers with women earning £8,500 less than men at £129,000 compared with £137,500.

Speaking to HSJ in October, chair of the Health and Care Women Leaders Network Sam Allen said that the gender gap was a known issue in finance and the NHS gender gap was less than the picture across other sectors. NHS Improvement was looking at consistency in senior managers’ pay at the moment, she added.

“There’s no standard senior managers’ pay scale,” said Ms Allen, who is chief executive of Sussex Partnership FT. “And there are different approaches in ambulance trusts and community. There is an absence of transparency around it.” One factor known to affect salaries is that men are much more likely to negotiate pay levels than women, she added.

But the NHS could look outside to learn from other industries which were making progress on these issues, she said, and at how jobs are advertised, the interviewing process and whether flexible working arrangements were available: “I’m really optimistic now could be the time [for change]… some of the biggest advocates for change are men in senior positions.”

HSJ has not published analysis on medical or nursing directors’ pay because of difficulties making accurate comparisons.

£315,000 – Tracey Batten, Imperial College Healthcare Trust. Based on four month’s salary and includes a pension adjustment. (0.027 per cent of turnover)*