The public may be sceptical about a tax increase, but it could play a significant and immediate role in the NHS to reduce the funding gap while maintaining quality of care and keeping the NHS free at the point of need, writes Nick Pearce 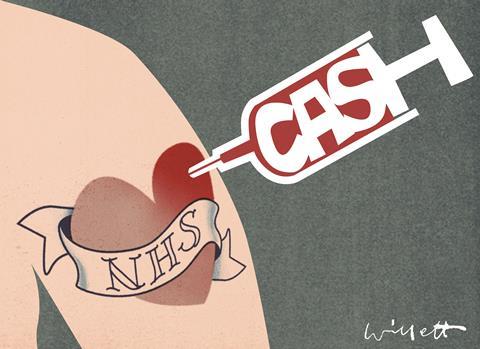 The NHS is facing a serious funding gap if demand continues to increase and budgets remain frozen – up to £30bn by 2021 according to NHS England.

The independent Commission on the Future of Health and Social Care in England, set up by the King’s Fund, is a timely contribution to determining how to address the financial challenge.

‘To avoid a financial crisis in health, the NHS needs a cash injection to accelerate innovation’

As our population ages and increasing numbers of people have multiple long term chronic conditions, pressure on our services increases.

This government has more or less maintained the NHS budget in real terms, but this contrasts with the historical 4 per cent annual increases that until now have made the NHS able to respond to growing demand.

If we are to avoid a financial crisis in health in the next few years, the NHS needs a cash injection to accelerate innovation and reform.

Health consistently comes out top in people’s priorities for extra government spending. But it is unrealistic to think extra funding could be found by cutting other Whitehall budgets more deeply. The ringfencing of NHS funding has already meant disproportionately large cuts to unprotected departments.

A dedicated NHS tax or National Insurance increase would boost NHS revenue while not affecting other departments’ budgets.

The public may be sceptical about tax increases in general, but is likely to be more supportive of those used to finance the NHS. A one percentage point increase in one of the National Insurance rates, ringfenced for the NHS, would raise £4bn and could be popular.

The government would, of course, need to be transparent that this funding was additional, not just filling gaps created elsewhere.

It would also need to show that the new funding was having a measurable effect and not simply disappearing without trace into the NHS budget.

Other approaches also need to be considered, as the commission’s interim report set out.

For instance, we should look for more productivity gains in the way services are delivered.

The NHS needs a cash injection to accelerate innovation and reform, and the commission suggests a tax could help

However, the NHS has already had to make fairly substantial efficiency savings over the past few years and there may be limited scope to do much more in the short term while maintaining quality of care.

Also, not all of these savings will be cashable.

There is also the potential to reduce the predicted pressure on NHS spending by reducing demand for services, or at least stemming the increase.

In healthcare this is surely an uncontroversial aim. We all want people to stay healthier for longer, which will in turn lead to lower demand on services.

However, many of the possible solutions - integrating budgets and services, providing whole person care, making greater use of community based settings, encouraging healthier lifestyles, supporting patients to have greater control and so on - may take time to have a major financial impact.

‘An NHS tax could be the catalyst that is needed’

Crucially, some of the measures to increase productivity and reduce demand would benefit from an upfront investment in cash. Using the “invest to save” principle, an NHS tax could be the catalyst that is needed.

An NHS tax or increased National Insurance contribution would not generate the full £30bn but it would be a significant contribution towards it.

It could have a near immediate effect in kick starting a programme of innovation and reform to redesign health and social care services to better meet patient needs and reduce demand over time.

An NHS tax could play a significant and immediate role in reducing the funding gap while maintaining quality of care and keeping the NHS free at the point of need.

Nick Pearce is director of the Institute for Public Policy Research and an author and regular commentator on public policy. He rejoined the institute in September 2010 after two years as head of the policy unit at Number 10