2
Darzi: care.data will close the gap between outsiders and those in the loop
Comment

Darzi: care.data will close the gap between outsiders and those in the loop

Through NHS England’s big data project, patients will benefit from sharing the knowledge those in the NHS already have and receive better care 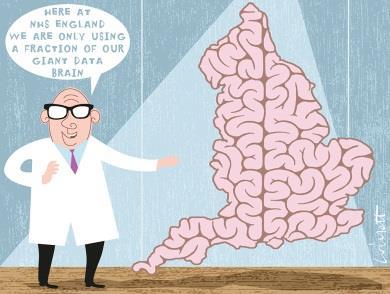 It is often said that if you want to find a good surgeon, ask an anaesthetist. We doctors working inside healthcare institutions have always known which of our colleagues are the best performers, to be entrusted with the care of our own relatives.

‘With more adroit handling, the care.data row is a row that might have been avoided’

But this imbalance in the information available to us and to our patients is about to change. We are living in the midst of a data revolution in the health service that will enable patients to share the knowledge that we have long had.

That is why the row over the government’s plan to gather GP records into a central database to be made available to researchers is extremely regrettable. Patients could benefit significantly from the insights the care.data project is expected to yield.

In a recent speech, Simon Stevens, incoming chief executive of the NHS, described how the veil between what those working inside healthcare organisations know about the care they deliver and what “people on the receiving end of our ministrations get to see” was about to be lifted.

He revealed the results of a survey by UnitedHealth, the global health organisation where he is currently a president of the health division, of doctors in five countries − the US, Australia, the UK, France and Germany. In four out of the five, most GPs (or equivalent) said there were significant variations in the quality of care provided by doctors and hospitals in their local area, ranging from 47 per cent in the US to 61 per cent in Germany.

However in four out of five countries only a minority of the public were aware of these. “That is what I call the transparency gap,” Mr Stevens told his audience at the World Innovation Summit for Health in Doha in December. “As nations publish more information, as they are rightly doing, that gap is bound to narrow,” he said.

Better data is key to improving the quality of care. That is what the NHS is now attempting with the care.data project, gathering information from GP records and using it to work out where care is going wrong − and where it is going right.

The NHS’s system of primary care provides a research database unrivalled anywhere in the world. But the project has become mired in a dispute over the confidentiality of patients’ records and the propriety of making the data available to the private sector.

All healthcare innovations carry risks − think of the side effects caused by drugs − but they must be balanced against the benefits. In this case the risks (of a breach of confidentiality) are very low and the benefits potentially huge.

To take one example: there are unexplained variations in bowel cancer survival between local areas. If we can follow a suspected bowel cancer patient from referral for tests by the GP through to treatment by the surgeon, we should be able to remove obstacles on the convoluted NHS pathway, speed their transit and improve the outcome.

With more adroit handling, this is a row that might have been avoided. Ministers need to acknowledge the risks and ensure everything reasonable is done to protect individuals’ privacy, while explaining the good that sharing data could do for all patients.

The benefits from “mining” data of this kind are only starting to be tapped. A hospital in Washington, US, made a surprising discovery when it analysed several years of medical records seeking ways to reduce readmission and infection rates. Top of the list of conditions that increased the chances of a patient being readmitted was their mental state.

The big challenge for the NHS − and healthcare systems around the world − is how to do more for less, in order to bridge the £30 billion funding gap predicted in the UK by 2020.

There is huge potential, which is already being realised by some enthusiasts in using new technology to help patients do more for themselves, whether by booking appointments online, ordering prescriptions or learning how to monitor their chronic condition, so they can spot problems before they turn into an emergency.

Big data analysis may also be used directly to reduce costs. In the UK last year, a study of drug expenditure revealed areas of the country where expensive branded drugs were being prescribed in place of cheaper generic alternatives because of variations in doctors’ prescribing patterns. The analysis suggested the NHS could save more than £1 billion a year if doctors changed the way they prescribed.

We must embrace innovative ideas like these to secure the health we want.

Mining the extraordinarily rich seams of data available, encouraging more patient engagement and using new technology to spread new ways of working to the country’s most distant outposts − these are the keys to the NHS’s survival.