David Bennett tackles a Monitor board meeting feet first, while Jeremy Hunt’s celebrations of a newborn daughter are tempered by Twitter taunts

The lead singer of Jurassic era rockers Lynyrd Skynyrd was once quoted saying he did not wear shoes while performing because he wanted to feel “the burn of the stage” on his feet.

Now it seems that, in his own desire to remain as tuned in to the action as possible, Monitor chief executive David Bennett has taken inspiration from the man behind Sweet Home Alabama.

While observing Mr Bennett holding court over the watchdog’s monthly board meeting last week, End Game could not help but notice that the boss was doing so sans chaussures.

We hasten to add that in all other regards business attire was present and correct.

The benefit of foresight 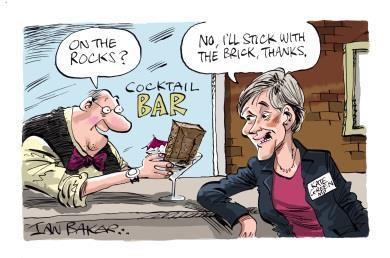 Just before MPs broke up for their summer holidays, members from Greater Manchester met to discuss proposals to shake up NHS services in the region under the Healthier Together programme.

Graham Stringer, the Labour MP who called the debate, lost no time putting his boot into the plans but he did find one thing to commend.

“I am going to be critical of the Healthier Together programme, but one facility that it does have, of which I was unaware until about half an hour ago, is the gift of prophecy,” he said.

“It has just put out a press release in response to what I am about to say, which is particularly clever because I have not yet fully decided what to say.”

Criticising the plans to downgrade some hospitals, Kate Green warned: “If one brick is removed from a cocktail of clinical support that is available to support high level specialisms, those specialisms are completely undermined and eventually will probably be unable to survive”.

Take the brick out of the shaker and step away from the cocktail glass, Kate; we fear you’ve been mixing them wrong all these years.

End Game would like to congratulate Jeremy Hunt on the birth of his daughter Ellie.

The health secretary received plenty of good wishes when he announced the news on Twitter but there was, of course, the odd bit of scepticism.

One Tweeter queried: “Did you put the hospital on eBay before you left?” Another jibed: “@Jeremy_Hunt well done both and welcome Ellie. Don’t forget 4 hourly feeds ;)”

One individual appeared particularly aggrieved, declaring: “Right, you’re back. Hope my child can be born in Herts & Essex Hospital. Oh no, we can’t as there is no maternity unit.”

We all know that the Freedom of Information Act is a force for good; the sign of a sophisticated democracy where transparency rules and where crucial information that the public needs to know is uncovered by intrepid information seekers.

However, End Game discovered a request from a perhaps overzealous reporter at a local London newspaper.

The journalist had written to Epsom and St Helier University Hospitals Trust asking how much it spent on pornography to help men giving sperm samples.

The requester clearly has a laser beam like ability to hone in on the burning issue of the day.

A resounding “zero” was the trust’s response. But what the reporter lacked in decorum they certainly made up for in diligence.

Accordingly, the second part of the request asked for the titles of every smutty film the trust had purchased.

We can only admire such attention to detail.