The health body’s comprehensive new guidance covers absolutely everything, literally, while one association leader reminds us to ‘never say never’ 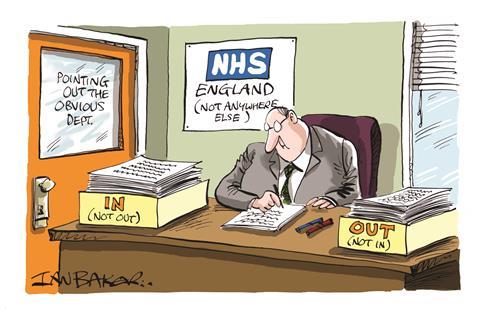 End Game is watching the emergence of new integrated care models with great interest, so we were pleased to receive new guidance on the topic from NHS England. In it, the organisation profoundly observed: “Each type of care model will exhibit different specific characteristics. These distinguish one care model from another.”

The differences between things are usually what tells them apart. So NHS England has helpfully defined the nature of pretty much everything in the universe, which surely goes beyond even its unwieldy remit.

We look forward to guidance from the Care Quality Commission on how “nice things are nicer than nasty things”. Maybe the Human Fertilisation and Embryology Authority is preparing a briefing on how “eggs is eggs”?

End Game recently read something that made us wonder if we hadn’t been too trusting when it came to the squabbles over reconfiguration.

While scrolling through the template for declaring any conflict of interest in a clinical senate’s clinical review, we were struck by “item E”, which defines the different kinds of interest an individual might have.

Most were straightforward, but “direct non-pecuniary interest” caught our eye: “For example, a reconfiguration of hospital services which might result in the closure of a busy clinic next door to an individual’s house.”

Has anyone ever tried to have a bustling clinic closed because it made parking on their street easier? Answers on a postcard, and we’ll go proper All the President’s Men on any tip-offs.

It has been brought to End Game’s attention that an employee posted the following message on NHS England’s intranet, presumably in an enterprising bid at making job cuts: “Has anyone in Quarry House got a guillotine we can borrow please?”

Regular readers might recall a dispatch two weeks ago when we told of care minister Norman Lamb’s queasiness at a description of endoscopy by a fellow MP.

End Game shared their unease when Mark Flannagan, chief executive of Beating Bowel Cancer, tweeted us a picture of a colonoscopy.

If you want to spoil your breakfast too, tweet us for the full, grisly photo.

Back in 2006, NHS England boss Simon Stevens, who was president of United Health Europe at the time, had this to say about HSJ: “When I was at the Department of Health [1997-2001], irritatingly, every Thursday morning before I got into the office, [then health secretary] Alan Milburn would nick my copy of HSJ off my desk. I guess that’s a tribute to the magazine.

“A weakness? The ‘humorous’ bits of HSJ never really are.”

End Game was disturbed from its afternoon kip last Thursday by the sound of screeching brakes as the Bubb bus pulled an almighty U-turn.

Sir Stephen John Limrick Bubb, head of the Association of Chief Executives of Voluntary Organisations, appears to have had quite a change of heart on Labour’s health plans, which are underpinned by the policy that NHS organisations should be the “preferred provider” of NHS services.

Having been cited by government spinners recently as a supporter of their health policies, he has penned a piece for the New Statesman arguing that, au contraire, he actually thinks Labour’s policies are preferable.

He wrote: “[Labour’s] plan… is to change the NHS by replacing competition with integration… Collaboration, rather than competition, becomes the driver of patient choice. No doubt market liberals of the left and right will sniff at this vision of a world of choice beyond how they define it.”

Could this really be the same Sir Bubb wrote in his blog in May 2011: “There will be no return to ‘preferred provider’. It is wrong in principle and wrong in practice.”

We suspect Labour’s 10 year plan, published last month, which said that voluntary sector organisations would be shielded from the preferred provider policy, might have something to do with the change of heart.