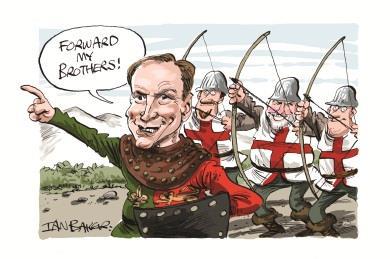 The link between Barts and the bard

The charismatic and all action NHS England chief executive Simon Stevens is undoubtedly Henry V, rallying his “band of brothers” to win the day and save the NHS. Indeed, the five year forward view was published only a couple of days before St Crispin’s Day.

Delivering the inaugural HSJ annual lecture “in the shadow of St Bartholomew’s Hospital” last week, Mr Stevens even mentioned the Battle of Agincourt.

He recalled an incident from 1999, when working for the then health secretary, Frank Dobson, who had made it his “personal mission” to save Barts from various efforts to close it.

Mr Stevens divulged: “When I pushed him hard on fundamentally what was at the heart of this, Mr Dobson replied, ‘I don’t want there to be a blue plaque on that building that says: this was the hospital that treated the wounded of Agincourt in 1415, closed by Frank Dobson in 1999.’”

Few can be better versed in the dark arts of Whitehall than Mr Stevens and, with an election brewing, we would love to know how he thinks the NHS can prepare itself for the months ahead.

Fortunately, we know exactly what he thought about that subject because he wrote a piece for HSJ about it in March 2005.

Under the headline “How to survive an election”, Mr Stevens wrote: “Do not dump on opposition policy and do not undermine government policy. Allow visits and keep local controversy to a minimum, in line with Cabinet Office/Department of Health election guidance. While comment is unwise, facts are important. Come out fighting if someone claims local services are getting worse when they are improving.

“Avoid surveys and pre-recorded interviews (your nuances will end up on the cutting room floor).

“Beware the tendency of papers such as the Daily Mail and, sadly, The Guardian to twist the reality of your hospital or primary care trust to fit their editorial antagonism to the government.”

Here are some more: “In some ways it is business as usual, but unpredictable things happen. Take 16 May 2001: Tony Blair launched the manifesto with a row about private treatment centres, Sharron Storer declared University Hospitals Birmingham useless and John Prescott punched someone.”

He almost makes it sound fun.

There was a Commons health select committee meeting last week. Again David Tredinnick wasted everyone’s time by asking one of his questions about alternative medicine.

No jokes or sarky remarks from us this time: we simply note how slowly time passes when you’re counting down to the dissolution of a fixed term parliament. Only three and a half more months to go…

At one point during the session, Mr Tredinnick suggested the Transatlantic Trade and Investment Partnership would bring “innovative ideas” into the NHS.

Wise to his tricks, health secretary Jeremy Hunt immediately replied: “Are you thinking about homeopathy in particular?” to general amusement.

End Game is, like all of you we’re sure, sick and tired of Mr Hunt banging on about Virginia Mason, as if all the NHS’s problems could be solved if it only stopped being itself and started being something else.

The constant, unfavourable comparisons with the health secretary’s favourite lavishly funded US private healthcare company must be demoralising for anyone in the NHS - but spare a thought for Virginia Mason herself.

No, not the reportedly ultra-safe Seattle based medical partnership, but the senior media officer at North Yorkshire and Humber Commissioning Support Unit.

After the Endgame trilogy of fantasy hokum novels by James Frey, we know how it feels to have our name taken in vain.

We have no idea whether Ms Mason is the safest PR in the NHS, but she dealt with our most recent enquiry efficiently. If only all PRs were more like Virginia Mason.