Instead of ineffective top-down change, we can encourage the NHS system to rapidly remodel itself by realigning incentives and regulation 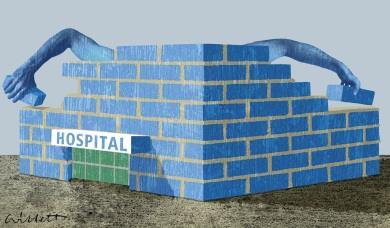 Over recent years, I have been spending increasing amounts of the time in the US working with hospitals and physicians as they seek to respond to President Barack Obama’s health system reforms.

‘The Lansley reforms ensured reform fatigue prevails in the NHS, with ingrained scepticism about the prospect of further top-down change’

While the UK media’s focus has been on the actions taken to extend healthcare coverage to the US’ uninsured population, the policy changes Obama implemented to drive down costs and improve population health offer the NHS more opportunities for learning. The US’ attempts to move from a care system to a health system are remarkably similar to the challenges facing the NHS.

The NHS celebrated its 65th birthday earlier this month. Readers of HSJ know that with NHS leadership forecasting a £30bn black hole in seven years despite the pay freeze and spending constraints of recent times, if it wants to celebrate another 65 years now is the moment to fundamentally change how it manages provision and prevention.

There are no shortages of proposals for reform. What is less discussed is how to turn reform visions into reality. Regardless of your views on the logic of Andrew Lansley’s reforms, what they did prove (yet again) was the difficulty of forcibly restructuring the NHS from above. Alan Milburn and Patricia Hewitt would no doubt recognise this problem. The Lansley reforms also ensured that reform fatigue prevails in the NHS, with ingrained scepticism about the prospect of further top-down change.

While it is much too early to declare victory for Obama’s reforms, they are provoking rapid change across the US healthcare landscape. Hospitals are merging, services across the continuum are integrating and providers are actively seeking ways to manage long term conditions that reduce the number of hospital stays.

This rapid pace of change has been achieved without a national review of hospital provision, government intervention in mergers and closures or the president taking personal responsibility for local health decisions.

They created the conditions for change by structuring incentives and regulation in ways that encourage the system to remodel itself. For an NHS with big ambitions, limited budgets and a track record of failed structural change, we might learn from this model.

The US Patient Protection and Affordable Care Act introduced a series of measures realigning the incentives for providers and helping stimulate bottom-up change. The Obama administration sought to drive down the prices paid by Medicare, imposing a “sustainable growth rate” that fixed the increase in tariff costs to the growth in GDP, preventing cost inflation from increasing the proportion of GDP spent on healthcare.

‘Trusts are still paid according to the number of people they treat, not for successful outcomes that prevent readmissions’

The reforms directly challenged hospital profitability and ensured they could not balance the books merely by treating more patients. Instead, providers had to reassess their business model and reconsider how they delivered care. For hospitals with the imagination to step beyond their traditional role, the opportunity to become an “accountable care organisation” (ACO) was created.

ACOs are paid a capitated rate to manage care for whole populations (not a million miles from the “year of care” model being discussed in the UK) and can retain half of any savings they generate. In future, they will not only share in savings but carry a proportion of losses as well. Rather than simply receiving income for treating illness, they have a financial incentive to promote prevention and reduce admissions. The impact has been rapid redesign of care pathways, with ACOs either providing services across the whole continuum, as in the Valencia model in Spain, or partnering with other organisations to integrate care.

The interesting point here is not the thought that integrated care and a focus on prevention and reducing hospital admissions might be a good thing − the UK is way ahead with that thought − it is the rate of change achieved without direct instruction, by realigning incentives and creating an environment where providers can respond. The Obama administration set the parameters, but the system chose to reform itself.

While successive UK governments talked about delivering integrated care, the current incentives system is structured to frustrate it. Trusts are still paid according to the number of people they treat, not for successful outcomes that prevent readmissions. GPs are paid more to develop new treatment services than to make their populations healthier. The NHS is being asked to do one thing, but paid to do another.

To create the conditions for NHS transformation requires a more agile environment and better alignment of incentives. “Two sizes fit all” (either payment by results or old style block contracts) will not create the self-improving NHS focused on population health that we need.

Independent integrated care institutions such as ACOs are not a panacea for all NHS ills. They may be able to plan A&E provision, but we might also want central planning and peer inspection to create a rational distribution of high-quality services.

Nor are they the answer to elective care, where patient empowerment, choice, competition and transparency still have a great deal to offer: we need to do better than a ComRes poll from March showing a decline to just one in five NHS patients knowing they had the right to choose where they are treated. But preventative care and whole person management are examples of where NHS leaders could better align incentive structures to drive locally led change.

Following the US example

There is a consensus that the NHS needs to transform how it manages chronic diseases, intervening earlier to manage patients in the community rather than waiting for problems to present themselves in A&E and supporting health management post-discharge more proactively. Rather than trying to legislate for preventative care by creating new structures, the NHS could follow the US example and change the financial incentives that drive care and create flexibility around institutional structures to empower providers to respond.

‘Transforming the NHS from above is a difficult, expensive and disruptive process’

The ACO model is designed around large hospitals as the system coordinators, but in the UK it doesn’t have to be like that. In some parts of the country, the future of innovative GPs might be to lead an ACO rather than manage a CCG. In others, the community or mental health trust might be the appropriate lead institution.

It is testament to the strength of the NHS that it has survived for 65 years. However, in gradually evolving over that period, the system of incentives guiding care has become misaligned from what it is that a modern health service needs to do. As the population and health needs change, so must the NHS. Transforming the NHS from above is a difficult, expensive and disruptive process.

Rather than trying to dictate top-down reform, NHS leaders should learn from the US, tying incentives more explicitly to integration and prevention and encouraging providers to respond by changing how they deliver care. The outcome will be an NHS that better reflects the interests of patients and taxpayers, and is better equipped for another 65 years.