The misattribution of budget for specialised services can be avoided through careful analysis of data, says Paul Fitzsimmons

There are 143 nationally defined specialised services, which account for £11.8bn of annual spending - equivalent to about 10 per cent of the overall NHS budget.

Specialised services are provided from relatively few specialist centres. They provide a range of treatments from long term conditions, such as renal, mental healthcare in secure settings and neonatal services, to rarer conditions such as uncommon cancers, burns, medical genetics, specialised services for children and cardiac surgery.

Budgetary shortfalls occur where there is a combination of small and variable patient numbers, scarce clinical expertise and higher costs.

This deficit is partly caused by the challenge of getting the global sum for specialised commissioning right.

There is a lack of reliable information about previous aggregate spending, and at the same time budgets have been mapped against historical spend at primary care trust level.

In the current financial year NHS England has again signalled it is heading for a second overspend.

In some regions it has already clawed back further funding from local clinical commissioning groups to cover this. Some specialised services may be handed back to CCGs to directly commission to avoid this continuing in the future.

So the message for CCGs is that additional financial pain could be on the way and there are three factors to consider.

First, we may see further in-year clawbacks against overspending.

Second, we may see a significant uplift of the CCG top slice next year to reflect this year’s overspending.

Third, CCGs may be given direct responsibility for a range of specialised services activity and the risk associated with absorbing this into their already strained budgets.

What should concern CCGs most of all, however, is that they currently have little insight into the scale of the challenge they face.

The data on relevant activity for their populations isn’t readily available and there has been varying progress in developing or providing local analytics to help them.

To help provide an insight into this national problem researchers at healthcare information provider CHKS carried out an analysis using the specialised services assignment adopted by NHS England, combined with national hospital episode statistics to find out the potential scale of financial impact on CCGs.

Researchers first looked at trends in specialised services activity over 12 months to July 2014 to understand the potential future scale of the problem.

They found that, although there is some fluctuation across the year, the underlying trend is one of a significant variation in the volume of specialised services activity. 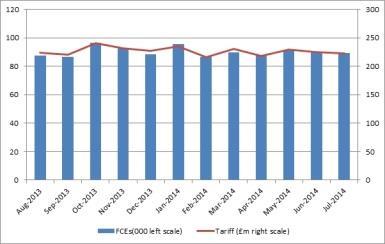 The national average is 1.5 per cent of all finished consulting episodes commissioned on behalf of CCGs each month (see graph 1, above). The next step was to look in more detail at how much of the activity has been charged back to the CCGs, despite the fact it qualified as specialised services activity.

Graph 2 (below) shows how this varies by up to 4 per cent across the country. In addition, this is activity that would have helped to understate this year’s reoccurring deficit.

Finally, researchers looked at the total cost of the misattribution to individual CCGs (see graph 3, below). 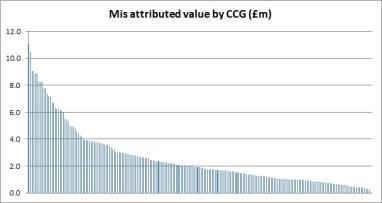 For most CCGs the cost of paying for specialised services activity ranged from just less than £0.5m to more than £10m. By looking further at one month’s data for the current year for 11 CCGs, misattribution ranges from £50,000 to £373,000 per month - a significant financial burden for individual groups to bear.

There are several implications of this analysis. CCGs need better access to data on the scale and value of specialised services activity being commissioned monthly on their behalf.

CCGs should also ensure the current top sliced funding actually pays for this activity and is not misattributed.

Given our findings, it would seem sensible for CCG finance teams to be independently modelling this year’s expected activity and value based on accurate data around 2014’s actual activity, including the misattributions, so they can have a transparent fact based discussion around future apportionment plans.