It's time to stop incentives for perverse waiting list management

Hospitals need to know they can treat their longest waiting patients without being clobbered for it. Jeremy Hunt has made a clear commitment to stop perverse waiting list management. It’s time he delivers on his fine words

I’ve been banging on about England’s perverse waiting times targets for years now, and although things have been getting better, it’s always “two steps forward, one step back”.

So I was very encouraged by the health secretary Jeremy Hunt’s words at the Royal Surrey on 4 August.

Apologies for quoting him at such length, but this is important and I think it’s worth it.

He said: “When the NHS started measuring performance against the 18 week target in 2007, something perverse happened.

“So a target intended to do the right thing ended up incentivising precisely the wrong thing.”

I couldn’t have put it better myself.

A timeframe for targets

“I want the NHS to put particular focus on anyone who has been waiting more than 18 weeks since being referred for treatment, so have asked NHS England to commission 100,000 additional treatments over the summer including 40,000 additional inpatient admissions.

“This focus on long waiters may mean we undershoot the 18 week target for a temporary period, although we will return to meeting it before the end of the year.

“Indeed, as the many NHS target experts will know, we could ensure we met the 18 week target every month by focusing those 100,000 additional treatments on shorter rather than longer waiters. But that would be an indefensible betrayal of those who have been waiting the longest and not one I would be prepared to sanction as health secretary.

“The truth is we need to ensure both that 90 per cent of people get their treatment within 18 weeks - the official target - and that people who are not treated within that period are not neglected.

“So I have set a timeframe of this calendar year to deliver on both of those objectives.”

I take that to be a very clear commitment to stop perverse waiting list management, especially during the national waiting list initiative which began in July, and to treat the longest waiting patients, even if that causes a breach of the adjusted admitted or non-admitted targets.

The July figures are now available, so let’s see if the promise was delivered.

I am going to apply quite a strict test for detecting perverse waiting list management to minimise the risk of false positives.

A service - i.e. a specialty within a trust - is only tagged with detected perverse waiting list management if all three of the following conditions are satisfied:

For belt and braces, an interactive map includes links to a full analysis of each service’s waiting times statistics so all the available detail can be scrutinised in each case.

Whose fault is it?

Whose fault is it when perverse waiting list management takes place?

It would be easy to rush to blame the hospital, but that would be unfair.

Remember, they are used to facing huge fines and regulatory action for breaching these targets, and if “the system” is pushing so hard for the achievement of perverse targets, it is hard to blame the hospitals for complying.

If the hospital did not in fact face penalties or regulatory action for breaching the perverse targets, and if that was clearly communicated to them in writing by the various penalisers and regulators, it would be fair enough to lay the blame at the hospital’s door.

But we know that matters were often far from clear in July and so any blame should be spread more widely to those that determine and apply the incentives up and down the system.

In the latest statistics published by NHS England - July - the tests were applied to 1,438 services that had decent numbers of admitted activity and waiting list sizes.

Of those services, 324 (23 per cent) breached the incomplete pathways target at the end of July, which means more than 8 per cent of patients on the waiting list were waiting longer than 18 weeks.

Of those services, 21 (6 per cent) were detected as apparently having perverse waiting list management, according to the tests.

So with all the preambles and caveats, here they are. 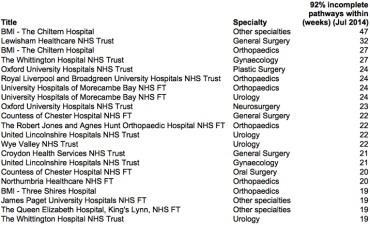 Also look at an interactive map of the same services, including links to a fuller analysis of each service’s waiting times data.

Of course if any of these hospitals believe that I have made a mistake and it has been incorrectly included, I would be grateful for their comments on this analysis.

What should be done?

It is time for the health secretary to deliver on his fine words.

Hospitals should not be pushed into perverse waiting list management.

‘Hospitals should not be pushed into perverse waiting list management’

If that cannot be done quickly, clinical commissioning groups and regulators should go easy on well planned breaches of the perverse targets so hospitals are not deterred from treating their longest waiting patients as part of an orderly recovery process.

I don’t believe that anybody in the NHS wants to see perverse waiting list management.

Yet somehow the incentives for it keep coming back with renewed vigour. It’s time to stop.

Hospitals need to know they can treat their longest waiting patients without being clobbered for it.