Talking dirty to the public

A big challenge facing those working in and around the NHS is how to communicate change with the public in a meaningful way, yet there was no mention of this in the five year forward view, writes Jenny Ousbey

The chief executive of NHS England, Simon Stevens, recently revealed the health service’s five year strategy. It pinpointed priority areas for improvement and transformation in the NHS. But for a wide ranging strategy it failed to recognise the importance of investing in communicating service change with the public.

‘There is obvious political risk in talking about an NHS tax now, but that risk could diminish’

Those working in and around healthcare know “reconfiguration” or “service change” will be on the lips of many after the dust settles on the 2015 general election. But we are still in a position where the vast majority of the public don’t know what these words mean.

Worst of all, if they do recognise these phrases, the public views them as mealy mouthed statements for their local maternity unit or emergency department closing.

Politicians can tackle this conundrum by being honest about the consequences of saying nothing to the public. But that approach is only tenable if all parties hold hands and parachute out of the plane together. That includes the NHS.

A poll by The Guardian and ICM revealed the public is broadly in favour of an NHS tax (48 per cent of those who responded to the poll agreed with an increase in tax and another 21 per cent were in favour of the NHS charging for treatments; 19 per cent of respondents stated they would be in favour of reducing the range of treatments that are currently available).

The parties didn’t seize upon this shift in opinion during party conference season and instead opted to recognise there was financial pressure, without producing a silver bullet. 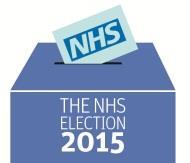 There is obvious political risk in talking about an NHS tax now, but that risk could diminish over the next two years.

In light of a projected funding gap of £30bn-plus by 2020 for the NHS, the Liberal Democrats believe a cross-party commission on how the NHS can meet the needs of an ageing society should be created immediately after the election.

I’ve heard this idea privately backed by some Labour and Conservative politicians, and even if ultimately rejected as official policy by whoever comes to power in 2015, some form of cross-party taskforce on the future of NHS funding is not beyond the realms of possibility, such is the scale of the challenge.

Some think a government driven communications campaign should also be a priority in 2015. In public health communications, campaigns on everything from flu jabs to bowel cancer and A&E have demonstrated a certain level of success. But billboards, top-down pronouncements, well meaning commissions and doom laden TV adverts aren’t going to cut it on their own.

The political rhetoric needs to harden, and the NHS needs to invest far more in supporting frontline clinicians to make the case for change. After all, nine out of 10 of us trust doctors, compared to one in seven for politicians.

The public is ready to swallow some bitter pills to protect one of the nation’s most beloved institutions. The NHS needs to recognise that communication is just as important as coming up with the right care models for local health economies over the next five years.

It’s about making sure a local NHS trust’s messages recognise the political realities on the ground, while talking about quality of care, not the cost of care, and using clinicians more than ever to front these messages.

This in turn will provide some fire cover for politicians wanting to talk tough to the public about future funding options.

Climbing this mountain of a communications challenge is currently everyone’s and no one’s responsibility. This is why healthcare communications professionals, and the wider NHS, should be prepared to get their hands dirty in 2015.