The better care fund needs to be stripped of bureaucracy

Although well intentioned, the better care fund has spawned initiatives that have become tangled up in red tape, says Sir John Oldham 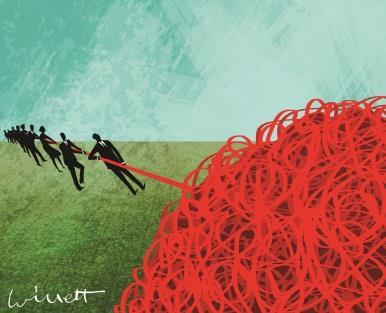 The recent calls – and promises – for increased funding for the NHS will not translate into meaningful change unless the inadequacy of funding in social care is also tackled. It would be like investing in refurbishing the interior of a house without bothering to repair the roof.

Has the better care fund helped that?

The fund has been a catalyst for a national and local conversation around integrated services from health and social care. It has added to the climate of consensus on this issue.

The requirement that plans are signed off by health and wellbeing boards has created a shared understanding of the challenges of delivering integrated services that had not been confronted previously.

The opportunity to share best practice and learning has helped some areas move forward. That exposure and the objective, encouraged organisations to ask hard questions about how to manage demand collaboratively. There was a start to local problems being jointly owned.

Although it was initially a commissioner led process, in the better examples it led to a picture of how commissioning intentions impacted on the whole system and included providers in the conversation.

What has worked less well

The heavy bureaucracy and mixed messages from the Department for Communities and Local Government, the Department of Health and NHS England belied the goal of more integrated working between health and social care. The appearance was that the focus was on the fund rather than on better care.

In turn this risks the judgement of the better care fund to be about finance, when those and other benefits will not have been realisable at this point,

This is not to say that better care for people was not the aim of organisations involved. It was just that the process did not make that a natural start point.

This climate was not assisted by unfortunate comments about the money being used for potholes – comments that represented a wider held bias.

The national process to date has been unfortunately frequently perceived to be about creating a plan and filling in the forms correctly, not necessarily delivery. This may have been unfair and incorrect, but in some cases it mitigated against analysing and understanding the underlying challenges that really exist outside the constraints of the better care fund plan format.

This reality gap – combined with the climate alluded to above – has risked widening the divisions between local government and health. There are many in local government who see themselves as victims of a process, when they were intended to be beneficiaries.

The requirements of the process were too generic to be sufficiently flexible to the nuances in different localities. There are instances of where the fund distracted from a more comprehensive attempt to integrate health and social care – for example, in Oxford.

One size fits all is definitely the wrong operating model.

The fundamental flaw in the analysis is the belief that a single policy around funding can fix the problem, or that it is synonymous with integrated care. This hype sets up the fund to fail.

And the worry is that this undermines the proposition of the benefits of truly integrated care. Indeed, the corollary is true. The better care fund will never succeed fully unless it is part of another group of parallel changes that promote more integrated care.

‘Start with better care for the citizen, then align the rest to make that happen’

In “One Person, One Team, One System” we set out the evidence that integrated care can improve outcomes for individuals, reduce unnecessary hospital admissions, and be more efficient for the health and care economy.

These objectives can be achieved.

What is required is:

Yes, financial flow and tariff changes are important as well. But start with better care for the citizen, then align the rest to make that happen.

The next phase of the better care fund should learn that lesson, and commence with a bureaucratic enema.