The explosion in Scottish waiting times is a political timebomb

Ahead of the general and Scottish elections Holyrood is trying to control the growth in outpatient waits, but risks unleashing a torrent of demand that could overwhelm higher profile waiting time targets

As the Scottish government tries to reverse the rampant growth in outpatient waiting times, it runs the risk of sinking both of its higher profile targets.

Outpatient waits have been soaring in Scotland since March 2012, oddly without anyone in the media or the Scottish opposition appearing to notice.

Last year that growth turned explosive: the number of 12 week plus waiters increased fivefold in the nine months to December. Yes, fivefold.

Nor are the numbers small: 12 week plus waiters now stand at nearly 10 per cent of the total outpatient waiting list. 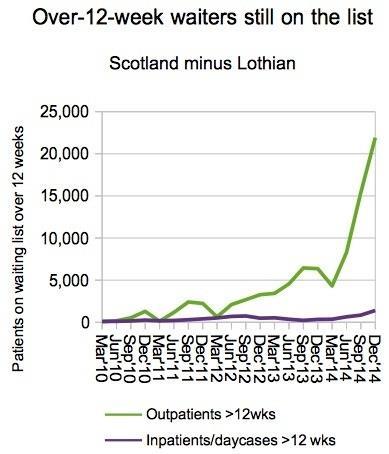 But this is just the tip of the iceberg. Its rise is propelled by larger forces happening below the surface: the total size of the outpatient waiting list is rising inexorably. 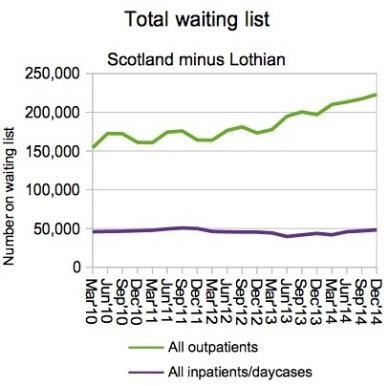 It is the growth in the total waiting list that needs to be stopped, by bringing recurring activity back into line with demand. Only then can a one-off waiting list initiative be effective and shrink the list so that short waits are sustainable once again.

But there is a problem. As soon as Scotland undams the stream at the outpatient stage, it will release a torrent of pent up demand on to the inpatient and dayc ase waiting lists.

The Scottish NHS is already showing signs of difficulty at holding down inpatient and day case waits, and releasing this backlog could tip the treatment time guarantee, or TTG, into large scale breach.

Also, if large numbers of long waiting outpatients suddenly appear on treatment lists, that will cause the RTT target to fail by an even larger margin than at present.

The TTG leaves health boards with no option but to treat them, even though they are long waiters whereas the RTT target favours treating short waiters.

Treating them is the right thing to do, of course, but in the topsy-turvy world of RTT targets, it is discouraged.

How big a problem?

We can have a go at quantifying the knock-on effects on the TTG using the Gooroo Planner.

I have modelled the activity needed to return the outpatient and inpatient waiting lists to the last point where they were nearly compliant with the 12 week targets, choosing the March 2011 list size for outpatients, and the September 2013 list size for inpatients/day cases.

As elsewhere in this analysis, all figures exclude NHS Lothian, which has been a special case. Also the data going into the model is not perfect, so the results are intended only to illustrate the likely magnitude of the task in hand.

To return to 12 week compliance in December 2015, I estimate that outpatient activity needs to rise by 7 per cent this year, compared with 2014 activity levels.

That is a 2 per cent recurring increase, and a further 5 per cent nonrecurring activity to shrink the list.

If inpatient/day case activity does not increase at all, the extra outpatient activity would cause waiting times to crash through the TTG to more than 20 weeks, and the number of TTG breaches will reach around 27,000.

As the old joke has it, you would not start from here. The pressures in outpatients have so far been ignored in the public debate, but cannot be ignored for much longer.

Action will have to be taken to deal with outpatients, in spite of the knock-on pressures for the TTG and RTT waits.

‘Action will have to be taken to deal with outpatients’

It would have been better to start tackling these growing backlogs back in 2012 when I first raised concerns about them, or in 2013 when the trend was well established, but we are where we are.

On top of that, this year we have the UK general election and, next year, the Scottish Parliament election. Waiting times in Scotland are all going to get rather interesting.

All data is from ISD Scotland