The NHS contract will make perverse targets worse for hospitals

If you punish hospitals for treating their long waiting patients, they are less likely to clear their backlogs. While the 18 week targets have been labelled as counterproductive, why is the draft NHS standard contract set to make it worse, asks Rob Findlay

NHS England accepts the perverse 18 week targets are counterproductive. The health secretary condemns them. So why does the draft NHS contract make them even worse?

“That would be an indefensible betrayal of those who have been waiting the longest and not one I would be prepared to sanction as health secretary,” thundered Jeremy Hunt on 4 August, as he condemned a target driven preference for treating shorter rather than longer waiters.

But what’s this? Now we learn that NHS England is set to bolster those perverse targets in next financial year’s draft NHS contract.

Is this defiance? Or merely a lack of attention? Either way, it speaks volumes about who is in charge of the NHS these days.

What makes the draft contract even stranger is that NHS England has already accepted the wisdom of waiving the perverse “admitted” and “‘non-admitted” sanctions. When push came to shove, the perverse targets were first out of the window when they wanted long waiters treated during the recent national waiting list initiative.

‘If you punish hospitals for treating long waiting patients, they will be less likely to clear backlogs for you’

They clearly realised that, if you punish hospitals for treating their long waiting patients, they will be less likely to clear their backlogs for you.

So why have they not carried that logic, and the secretary of state’s clear criticism of perverse targets, over into the contract sanctions? Instead they are trying to make the perversity worse.

Perhaps they can be persuaded to change their minds? The draft NHS contract 2015-16 is out to consultation, so we all have an opportunity to remind NHS England why these perverse targets are a bad thing.

There are two things in particular they should change.

First, they should change how the three “18 weeks” sanctions are weighted. Without necessarily changing the overall financial burden on trusts, they should change the balance, so that the heaviest burden does not fall on hospitals that do the right thing by treating their long waiting patients.

If you apply the draft 2015-16 sanctions to the observed breaches seen in this financial year so far, you find that 58 per cent of the total sanction value would be perversely extracted from trusts for treating long waiting patients, compared with only 42 per cent where trusts kept them waiting even longer.

The perverse sanctions dominate in every single month, even before the “amnesty” gave trusts more freedom to treat their long waiting patients. 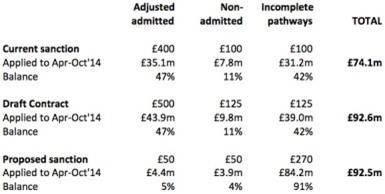 Second, clinical commissioning groups should be given more local discretion about when it is sensible to apply the perverse penalties.

At the moment the draft contract abolishes local discretion by making all these sanctions mandatory; a big centralising move if ever there was one.

If a trust has foreseen the breach, and has suitable plans in place to recover short waiting times and maintain them safely thereafter, then CCGs should have the freedom to waive perverse sanctions while the backlog is being cleared.

Consultation on the draft NHS contract 2015-16 is open until the end of December, and so far NHS England say that “views varied on the appropriate sanction value for individual standards”.

When it comes to sanctions that punish hospitals for treating long waiting patients, let’s make sure they hear the message loud and clear.