Professor Christopher J Harrison, medical director of The Christie, explains how he and his colleagues made use of a network model to improve the experiences of cancer patients in the region.

At the turn of the century, The Christie faced a knotty problem. As a successful tertiary cancer centre, we brought together cutting edge cancer treatments, first class cancer education and first-rate research on a single campus. But how could we claim to be one of the world’s leading cancer centres when the population we served ranked among the country’s poorest for overall cancer care?

A 2005 review identified the need to address unacceptable inequalities in cancer outcomes and the uptake of specialist cancer care across Greater Manchester and the eastern part of Cheshire. Although the data available then was difficult to interpret, it was clear cancer patients in the north of our city-region were being diagnosed too late for modern treatments to be effective or to qualify for entry into clinical trials.

Patients also regularly faced agonisingly long bus journeys, often up to two hours and involving multiple changes, to get from their home to the cancer centre. Patients might have to make 30 or more daily return journeys as part of a single course of treatment.

The challenge we faced in 2005 was how to spread innovation beyond the cancer centre campus, while still ensuring consistent and equitable implementation, so the most effective and innovative new treatments became available to all. Our strategy was to establish a devolved network of Christie branded and run cancer services in partnership with hospitals and primary care teams across the city-region.

We believed specialist care need not be centralised and that properly organised networks can bring specialist treatments not just to near where people live but to their homes.

Our first networked radiotherapy centre opened in Oldham in 1997 and our approach has been developed so that our main South Manchester clinical-academic campus is now part of a wider network of specialist oncology care, covering 15 locations in Greater Manchester and Cheshire and a population of 3.2 million.

We also provide chemotherapy in people’s homes and our staff are involved in outpatient clinics and multidisciplinary team meetings across the entire network. 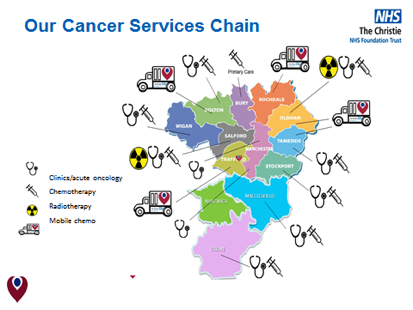 Known as “The Christie @ model”, this network enables high-quality specialist care to be provided to reliable uniform standards. The full model is a partnership between The Christie and host organisations, in which The Christie takes responsibility for employing professional staff and the associated care delivery and governance, while the host provides, under a service agreement, access to support staff and services.

Care provision is backed by the expertise, reputation and scale of Europe’s largest comprehensive cancer centre, and the Christie Quality Mark and accreditation programme, which reassures patients they will receive the highest standards of care wherever Christie @ services are delivered.

Since 1997, we calculate our radiotherapy network alone has saved 34,000 return journeys each year, equating to over 1 million miles of reduced travelling for patients annually. One third of all Christie radiotherapy and chemotherapy treatment is now provided away from the main Withington site. This will rise to half of all treatments on completion of the planned expansion of our centre in Macclesfield to include radiotherapy and more chemotherapy by 2020.

Of clinically eligible treatments (ie: those which do not require specific equipment, such as proton therapy), 80 per cent are now provided away from the main site.

For success, our model and the development of effective cancer care pathways nationally requires widespread refocussing of commissioning and regulatory approaches as well as strengthened national policy guidance to promote alignment of financial and performance ratings and incentives with cancer care pathways

Of course, these changes are not entirely due to our devolved delivery network but we believe this has contributed to an overall improvement in cancer care, supported earlier and faster diagnosis and enhanced multidisciplinary team working. It has certainly ensured consistent standards and more equitable access across the city-region.

However, some things have worked better than others. One lesson is that the fears of other providers about the cancer centre wanting to “poach” patients and pull more patients into a centralised facility must be addressed head on.

It’s important all partners recognise the model’s purpose is to maintain the stability of local services and local access to care while, at the same time, increasing critical mass, driving specialisation and innovation, and improving patient safety, experience and outcomes.

A prevalent attitude unthinkingly equates specialisation of care with centralisation of care. We reject this simplistic assumption, although we recognise that, for some major capital investments, concentration in fewer locations will be essential for efficiency.

However, as we have shown with the Christie @ example, where the crucial aspect of specialisation is expertise and teamwork, it is feasible to create distributed networks of care which enable cutting edge treatments and innovative therapies to be available locally.

We have been fortunate that our developments have received ongoing endorsement and support from regional commissioners and regulators. For success, our model and the development of effective cancer care pathways nationally requires widespread refocussing of commissioning and regulatory approaches as well as strengthened national policy guidance to promote alignment of financial and performance ratings and incentives with cancer care pathways.

Roger Spencer, chief executive of The Christie, and Tom Thornber, the trust’s director of strategy, also contributed to this article.