After walking 300 miles from Jarrow to London, I met up with thousands of other protestors to oppose the government’s treatment of the NHS. I hope more will join us as the fight to save it continues

On 6 September we finally arrived in Trafalgar Square after 22 days of walking from Jarrow to protest about the current state of the NHS. The march was organised by the “Darlomums” – a group of mothers based out of Darlington – attracted thousands of people on the way and culminated in a massive rally in London.

I first heard about the march three months ago and immediately signed up for it; it provided the vehicle for expressing my deepest frustration with the direction of travel for the NHS. Not doing so was not an option, despite cynicism from others about the “futility” of such protests, because I want to be able to sleep at night having at least tried. And I have not given up hope yet. 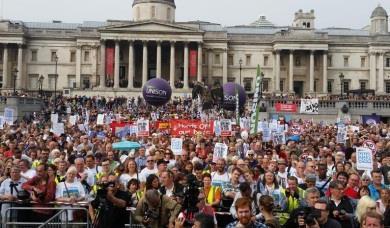 The 999 Call for the NHS march followed the route of the Jarrow march of 1936, finishing in Trafalgar Square

Having been a medical bureaucrat for a long time and having lived through many reorganisations of the NHS, I was not a stranger to constant change, but the sheer scale and pace of disorganisation of the NHS under the coalition government disappointed me.

As someone who tried to deliver the reforms since Margaret Thatcher introduced the internal markets, I had started despairing about the relentless pursuit of a neoliberal ideology despite growing evidence against such folly. The NHS is gradually being dismantled, so I marched to stop the destruction of the best healthcare system in the world.

I chose to work in the NHS, after graduating from India, and stuck to it despite serious personal challenges. Not only did I have to change career in the 1980s due to discrimination and the lack of opportunities for international medical graduates, I was also made redundant at the peak of my career and had to sign a compromise agreement.

But giving up was never an option for me; you can take a man out of NHS but you cannot take the NHS out of the man. I, and millions of others, want to save the NHS and indeed our civic society.

The NHS is what defines us as a caring society and as people who take the responsibility of preserving their inheritance seriously (the crowds paid tribute to their parents and grandparents for creating the NHS) and who want to be their brother’s and sister’s keepers, and so they came out in droves to show their support and share their stories of local struggles during the march.

‘I have been shaken by what is happening, which is an affront to our basic values of decency, fairness and compassion’

Even I have been surprised at the mayhem being unleashed across the NHS. There is hardly any area where there have been no local protests about closures and reconfigurations. It is almost as if whole of England is under siege.

I have always considered myself a moderate, but even I have been shaken by what is happening, which is an affront to our basic values of decency, fairness and compassion. I still believe there is a place for markets in the NHS and that some reconfigurations are essential. I also believe there is a need to define the limits of what the NHS can and should provide. Most importantly I fully accept that the NHS needs to improve, become safer and respect and preserve patients’ dignity.

But rather than address any of these issues, current policy is dismantling this cherished institution. If people like me have been radicalised then you can imagine how desperate the situation is.

What is happening to the NHS is not unique. The same model of marketisation, reducing the welfare state and passing responsibility to the individual, and commoditising services and fragmenting them to benefit the few is being adopted across the public services.

Making all this possible is the failure of our democracy and lack of accountability. How can a civic society allow a government to pursue things with no political mandate – “no top-down reorganisation” of the NHS led to the most brutal, needless (in austerity we have ended up spending £3bn on reorganisation) and senseless (to the extent that hardly anyone can explain the current NHS structures, and the next round of reorganisation has already started) changes.

Bureaucrats and opportunists have copied the behaviour of politicians. The sharks have come out at all levels to create a bloodbath and feast on the public funds bounty to create private wealth.

All this has to stop, and much as I detest the idea of the NHS becoming a political football again in the next election campaign, I believe it is inevitable and it is important that we do make the NHS a central feature of the 2015 election.

I am not (yet) party political and in any case this is not a party issue: all three main political parties have pursued the same ideology; this is a fight between the elite and the masses and about oppression. We need to use the next few months to develop a new vision for an NHS fit for the 21st century and we need to find a way of securing a political mandate for it.

As Nye Bevan said: “The NHS will last as long as there are folk left with the faith to fight for it.” The march has certainly shown that there are enough people fighting for the NHS. I hope that others will overcome their apathy and cynicism to join us.