As budgets are squeezed and decision making is more transparent, CCG decision making leaves them open to challenges through the legal system. David Lawson explains the deciding factors and the main routes of challenge. 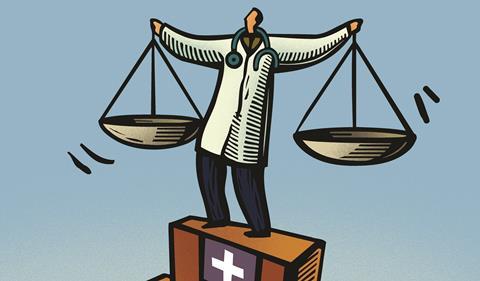 Usually it is the CCG’s view of what is “reasonably required” that matters. However, as budgets tighten and decision making becomes more transparent, CCGs may face more obstacles.

This can leave group decisions about treatment vulnerable to challenges through the legal system.

Treatment decisions are rarely made on the basis of cost alone. However, it is established that cost is a relevant factor.

For example, in 1995, in the case of a 10-year-old child whose parents sought funding for a third round of treatment for leukaemia, the Court of Appeal held that “difficult and agonising judgements have to be made as to how a limited budget is best allocated to the maximum advantage of the maximum number of patients. That is not a judgement which the court can make”.

In 2012, this was brought up to date in a case concerning laparoscopic gastric bypass surgery for a man with a body mass index of more than 40 and comorbidities that included renal impairment and hypertension.

The former primary care trust had refused an individual funding request on the basis that the case was outside the PCT’s general policy for gastric bypass surgery and not exceptional.

The Court of Appeal considered that it was legitimate for the trust “to perform its function by allocating scarce resources strictly according to the PCT’s assessment of medical need”.

The Human Rights Act 1998 has not provided an easy route of challenge for patients.

Article 8 of the European Convention is most often used. It states: “Everyone has the right to respect for his private and family life, his home and his correspondence.”

Claimants argue that a failure to provide appropriate medical care is an interference with their human dignity and hence their private life, which the CCG must show to be proportionate.

CCGs must have article 8 in mind when making decisions and “grapple with the difficult ethical and practical questions involved in setting policy”, as said in one case. The same applies when deciding individual exceptional cases.

While claimants have not had much success using article 8 to access particular treatment, the courts might require a CCG to reconsider if it did not take account of these rights. Article 8 can be “engaged”, meaning that it must be considered, even when it is not breached.

The National Health Service Act 2006 requires CCGs to “promote the NHS constitution” in the way they provide health services.

The constitution gives patients the “right” to have treatments that are recommended by the National Institute for Health and Care Excellence. Treatment decisions must take national policy into account and follow it with reason.

So what happens if a CCG does not fund treatment recommended by NICE?

Last year the courts held that a CCG policy of not funding egg freezing prior to chemotherapy was unlawful given the strong recommendation from NICE that “women preparing for medical treatment that is likely to make them infertile should be offered oocyte or embryo cryostorage”.

Seemingly, the CCG had not followed the NICE recommendation because it disagreed with the rationale for it. That was not a valid approach to NICE guidance – though even there the CCG was given time to update its policy.

In the 2002 Rose case the court held that a proper policy on assisted reproduction would need to consider the evidence base for semen and egg freezing, the guidance from NICE and the cost. The CCG’s policy was in breach of section 149 because it did not analyse the issues.

Equality law also covers cases where it is necessary to work out who the “comparator” is so that one can see if there has been any different treatment. In one case, a Berkshire PCT was challenged in 2011 over whether transsexual women seeking breast enlargement should be compared with natal women seeking cosmetic breast augmentation.

It is common that patients need to show “exceptionality” when making an individual funding request. This approach is lawful so long as “exceptional” is not being used to hide a blanket ban or a requirement for uniqueness - it has to be possible to envisage what the exceptional circumstances might be.

Where NICE has set out a well researched conclusion about a treatment, CCGs may not need to look at a lot of technical evidence other than about the particular patient.

If detailed scientific evidence has to be considered, the courts will allow a degree of discretion where evidence can be interpreted in two ways.

However, the scientific evidence has to be understood and applied to the correct facts, even where decisions have to be made quickly.

In a 2007 case, a patient sought a prescription for Avastin. She was helped by the low cost of the drug (about £1,200 per cycle) which made it hard for the PCT to put great weight on arguments about scarce resources.

The claimant successfully relied on expert medical evidence to show that the panel had asked an irrelevant question about the role of Avastin in her treatment to date and had failed to take into account the chance that the drug might significantly prolong her life.

In addition to possible challenges to current assessments, there are thousands of open “retrospective claims” for continuing healthcare.

In July last year the High Court set aside a CCG’s decision that a patient was not eligible for continuing healthcare between May 2007 and March 2008. The events took so long to come to court, not because of delays in the legal system, but because the CCG only decided about these periods of care in 2013.

The judge considered that the “rationale” section of the nursing needs assessment tool in May 2007 was inadequate and that it contradicted parts of the continuing healthcare checklist. The judge required the CCG to reconsider.

Simply getting the decisions made and challenges to those decisions determined is difficult. In most cases, challenges will be considered by the Parliamentary and Health Service Ombudsman rather than the courts. However, the delays in the overall continuing healthcare process – which runs to years in some cases – may lead applicants to turn to the courts.

Finally, the main route of challenge to treatment decisions is by judicial review which applies legal tests that are relatively hard for claimants to meet. The Court of Protection was set up to consider questions of capacity and consent and applies a test of “best interests”.

That court is still working out how to consider best interests where a CCG says that certain treatment is not available. The Aintree case last year said the Court of Protection should only choose from available options but that debate continues.

David Lawson is a barrister at Hardwicke