Nurses, ambulance crews and support workers should get the covid vaccine first

Tim Cook and Simon Lennane set out which NHS staff should be the first to receive the SARS-CoV-2 vaccination.

In the wake of the authorisation of the Oxford/AstraZeneca coronavirus vaccine, NHS England has announced NHS “frontline” staff should begin to be vaccinated “immediately”.

1. What does “frontline” mean when referring to healthcare staff?

These questions may be harder to answer than they appear but asking them may help define the issues. Without a structure there is likely to be wild variation in practice (which we are already aware of) and concerns over lack of equity.

The Office for National Statistics has published covid-19 mortality by occupation up to 25 May 2020 in England and Wales. Combining this data with workforce data from NHS digital enables calculation of the relative risk of death associated with covid-19 for different professional roles.

Figure 1 shows that healthcare staff, during the first surge, had an approximately 41 per cent (95 per cent confidence interval 26-71 per cent) increased risk of death from covid-19 compared to others of similar age. This excess risk of death is lower than the excess risk of infection (see below), most likely because healthcare staff have better average health than the general population. Within healthcare there are both high and low risk roles: those in non-patient facing roles have a lower risk of harm than the general population, and the excess mortality of those in patient facing roles will exceed the reported overall 35 per cent increase. 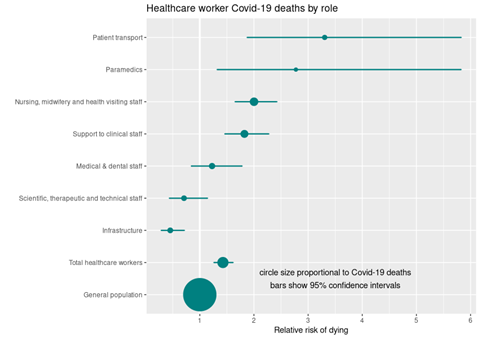 Figure 1: Deaths from covid-19 by role, relative to general population of working age

Vaccination of healthcare staff serves a number of different priorities. First it will reduce harm due to healthcare staff sickness, as although covid-19 may not kill many in their middle years, it causes an illness typically requiring several weeks away from work and in some cases is followed by chronic illness.

It will reduce the risk of in hospital transmission (much of which occurs before symptoms develop) from healthcare staff to other staff, or patients, the latter of whom have a high mortality if infected. In two studies of higher risk surgical and medical patients, in-hospital infection with SARS-CoV-2 was associated with a mortality of more than one in five.

Preventing healthcare staff infection will also preserve services: staff absences are above 10 per cent in many locations and in some it is notably higher. Reduced staff availability due to illness, self-isolation and shielding is critical to maintaining services, particularly those such as emergency departments and intensive care units where specific skillsets are needed.

Importantly, most risk data relates to infection during the first surge and the second surge has been associated with a greater number of hospital outbreaks. To compound the problem the new variants of SARS-Cov-2 which will soon be dominant throughout the UK are notably more transmissible – this will increase the risk to healthcare staff, directly during patient contact and indirectly because there are likely to be many more patients and close proximity interactions.

How to define “frontline healthcare staff”

Several hospital-based studies have explored which groups of healthcare staff are at risk of infection.

The synthesis of this is: front line and front door staff (and their household contacts) are at increased risk but non-frontline staff are not, nurses are at greater risk than doctors, junior nurses and doctors are at higher risk than senior doctors and nurses, housekeeping and portering staff are in high risk groups, staff caring for patients with covid-19 are at increased risk (except if working in ICU) and locations such as general medicine and medical wards are at higher risk than surgery, anaesthesia and ICU. The main limitation of this analysis is that it includes only hospital-based care, excluding both general practice and staff involved in patient transport.

In these studies, “frontline” is not consistently defined, but the sense running through the studies is that individuals who come into physically close contact with covid-19 patients for more than brief periods, particularly for direct delivery of care, are at increased risk. This is consistent with knowledge that risk of infection transmission is significantly impacted by both proximity and duration of contact. Table 1 suggests patient facing staff account for approximately 1 million NHS staff.

The ONS’ most recent publication on covid-related mortality by occupation included deaths up to 25 May 2020. This timescale includes 78 per cent of all the healthcare staff deaths recorded up to 12 October 2020. Our analysis shows first (Figure 1), that only frontline (patient facing) healthcare roles are associated with an increase in mortality and those in non-patient facing roles have a lower mortality than the general population.

Second, all frontline staff, irrespective of role, are at increased risk of death but the burden of risk that frontline nurses and clinical support staff experience is increased. Thirdly, those at the highest risk are ambulance and transport staff who are exposed to patients often at the start of their illness and in potentially poorly ventilated enclosed spaces both when visiting patients homes and during transportation.

A separate analysis has shown the relatively low risk of mortality amongst those working in anaesthesia and ICU roles and locations. Of particular importance, the extent of the occupational increase in mortality risk (a four-fold increase relative to the general population and a greater than seven-fold variation between healthcare roles) far exceeds the impact of gender, ethnicity of comorbidities as individual factors which generally alter risk by less than 100 per cent and rarely by more than two-fold.

There are important limitations to this analysis. First, some important roles are not identified and these include housekeeping and portering staff. The ONS does not separately identify housekeeping staff who work in healthcare and hospital porters are include by the ONS as “infrastructure” staff. Whereas serology studies identify these roles as being associated with increased risk of infection, we are not able to calculate relative risk of mortality.

Second, the analysis considers only the individual’s role: a full analysis considering other risk factors would be of greater value, but the data are not available. Third, the data could usefully be updated to include more recent deaths: many of the staff who died were exposed before personal protective equipment guidance changed, which may impact risks.

We also maintain a database of deaths of healthcare staff that are in the public domain and have reported this previously. Our database, likely misses many deaths as they have not been reported in the media. There appears to be differential reporting with most medical staff deaths reported in the media but far fewer of the deaths of support care staff reported. Despite this we note six portering staff among 255 deaths (2.4 per cent) in our dataset and the ONS data reports nine. It is certainly plausible that portering staff (and housekeeping staff) are missed by the above analysis.

Again, in considering which healthcare workers to prioritise for vaccination there are other practical and moral factors to consider. There may be a practical imperative to prioritise those healthcare staff who are specifically needed to maintain services and who are particularly difficult to replace, for instance ICU staff may be prioritised above their risk level for this reason.

Morally it may also be right to prioritise those front-line staff who have had the most constant exposure to covid-19 and its attendant physical and psychological distress or those whose services have remained busiest throughout. This list likely includes general practice, emergency departments and respiratory, general medicine, geriatric wards and ICU. However, there will be many other locations also calling out to be prioritised and such judgements will likely become both complex and partisan.

Deciding which healthcare workers should be prioritised for vaccination first is complex. It is clear those who have patient facing roles should be prioritised, while those who do not, should not. Decisions about which frontline staff to vaccinate are less clear. There is likely currently too much emphasis on an individuals’ personal risk and insufficient consideration occupational risk: both are important in overall risk.

To reduce healthcare staff deaths, ambulance staff then nurses and clinical support staff should be prioritised. Within staff groups personal risk factors such as age, sex, ethnicity and comorbidities may be useful to prioritise. Other staff groups might also be considered for prioritisation; for practical reasons – to maintain services; and for moral reasons – to protect those staff who have and continue to put their wellbeing and safety at risk simply to attend work and care for others.