With over a quarter of people accessing acute hospital services likely to have dementia, Sarah Waller and Abigail Masterson describe an initiative that is already bringing benefits to patients, carers and staff

Hospital stays are particularly detrimental for people with dementia, who experience longer stays and poorer outcomes than the general population.

The King’s Fund’s Enhancing the Healing Environment (EHE) programme has been working with 23 acute and mental health trusts to improve the care of people with dementia in hospital through a Department of Health-funded programme of projects to improve the physical environment of care.

Normal ageing has an impact on the senses, particularly sight and hearing, and this is exacerbated by the distortions in perception associated with dementias such as Alzheimer’s disease. This means that people with dementia are likely to interpret what they hear and see very differently, particularly when they are in unfamiliar surroundings.

Being admitted to hospital is an anxious and potentially frightening experience for anybody, and for older people who may already have a degree of cognitive impairment, admission may result in agitation, disorientation and distress.

While patients are in hospital, poorly designed ward and departmental environments can lead to further disablement, with the result that they may not be able to return home when the acute episode of care is completed, which is both devastating for them and their families and has significant cost consequences for the care system.

Initial assessments of the hospital environment in both general and mental health settings, taking into account visuo-spatial disabilities that can affect people with dementia, showed that despite many of the sites being relatively new and several of the mental health wards having been purpose built for the assessment of people with dementia, there were common issues of:

As part of their involvement, each of the trust teams undertook a King’s Fund programme designed to equip them with the knowledge and skills to undertake their environmental improvement project. Each team was clinically led and included an estates representative and critically, a patient or carer representative.

The importance of the care environment is recognised in the Royal College of Nursing’s Commitment to the Care of People with Dementia in General Hospitals and although there have been significant improvements in staff training since the publication of the National Dementia Strategy, attention has not always been focused on the impact that the physical environment of care can have on people who are confused. 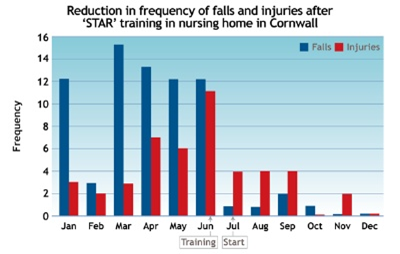 This phase of the EHE programme has highlighted the need for better training and education of clinical, estates and support staff in the importance of developing more supportive design solutions for people with dementia and the critical role that carers can play in this education.

The experience and deep understanding that carers have brought to the teams has made sure that improvements have been focused on the areas that really matter to people with dementia.

During consultation on the schemes the teams have been encouraged to involve groups, for example their local Alzheimer’s Society, and engage the community more widely.

This has not only brought benefit in terms of additional support and funding for some schemes but also provided an opportunity to better inform and engage the community in caring for people with dementia.

The design of the physical environment can significantly help in compensating for sensory loss and cognitive impairment as well as contributing to supporting independence. The experience from the programme has led to the development of overarching design principles which bring together best practice in creating more supportive care environments for people with cognitive problems and dementia.

The principles were drawn from a number of sources and were informed by research evidence and are grouped around the desired outcomes for people with dementia in ward environments. These are easing decision making; reducing agitation and distress; encouraging independence and social interaction; promoting safety and enabling activities of daily living. Although developed for use initially in hospitals, they have potential for all care settings and in the home environment.

Using these principles it is already evident from the trusts that the King’s Fund has been working with that significant improvements can be made to the built environment in hospitals to improve the care and well-being of people with dementia.

In addition, estates colleagues have commented on how the refurbishments have been easier to plan as the clinical staff are much clearer about what they need to support patients more effectively, with a resultant economy in time and costs.

Furthermore, not all improvements are costly or require major capital works. A key early action taken by all teams has been to de-clutter spaces including ward corridors and areas around reception desks to aid legibility and improve safely. Old and unwanted notices, which can cause distraction, have been removed and signage, particularly to toilets and bathrooms, has been improved.

Patients are being assisted to remain continent by ensuring good colour contrast between  seats, rails and white sanitary ware so that the toilet is visible and infection control improved by ensuring that taps are easy to use and look familiar.

Ward areas can be bland with few distinguishing features, for example, different bed bays may look very much like one another. The use of accent colours, chosen for contrast, together with signs that use both pictures and text are proving very helpful in aiding patients to find their beds.

Brightening up spaces by displaying for example, large photographs of local landmarks have also proved very popular and effective in engaging patients who may have difficulty in communicating with relatives and staff.

Small seating areas are being provided in ward areas where patients can look at books or enjoy interactive artworks. Eating and drinking is being encouraged by the provision of drinks and snack trolleys and spaces for social dining in ward bays.

Matt flooring has been laid and together with easy to grip handrails in contrasting colours, is encouraging patients to keep mobile.

Redesign not only released more space for patients to walk around but has also encouraged clinical staff to write notes at the small pods located in each bay. This has had an added bonus of making them more visible to patients, and as a result, call bells are being pressed less frequently and falls are being prevented.

Day rooms have been redesigned in creative and innovative ways as sensory rooms, lounges and even a café where patients with dementia and their carers can enjoy some time together away from the clinical environment.

Is your ward dementia friendly?

The EHE projects were chosen to provide a range of exemplars capable of wider replication, with local adaptation, across the service. As part of the programme an environmental assessment tool, “Is your ward dementia friendly?”, has been developed with the participating trusts.

With the active involvement of carers in its design, the tool has been based on best practice and is practically focused and easy to use. It has been designed for use by patients and carers together with staff to assess the ward environment and encourage discussions about care delivery.

Extensive testing with ward staff and carers has indicated that this not only gives a benchmark to measure against and a useful framework for drawing up an action plan for improvement but also enables really useful discussions about philosophies of care and service delivery.

Even in the current economic climate, providers of health and social care services will continue to need to maintain and improve the buildings in which they deliver care.

Unfortunately although there continues to be growth in spending on the physical maintenance of healthcare buildings, this considerable investment does not always result in environments of care that are fit for purpose, sustainable or provide good value for money.

Although some of the EHE schemes have only recently been completed, initial data is indicating that there have been reductions in falls and incidents of challenging behaviour; reductions in the use of antipsychotic medication; and improvements in staff recruitment and morale.

The scale of the challenge of caring for people with dementia is enormous. The EHE programme has demonstrated that using design principles founded on an understanding of the impact that the physical environment can have on people with dementia, and in partnership with carers, it is possible to create a more supportive care environment.

Sarah Waller is programme director, Enhancing the Healing Environment and Programme. Abigail Masterson is the programme evaluator at The King’s Fund