Youngsters set mission to earn their very own NHS badges 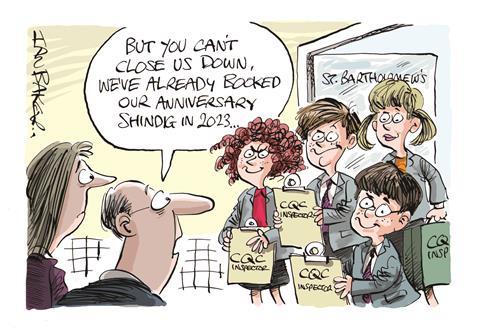 End Game has long seen itself as a blue sky thinking troubleshooter in the style of Steve Hilton, the prime minister’s former strategy director. So we were delighted to stumble across a veritable cartridge of silver bullets in the shape of the NHS Digital Badges initiative for 5-14 year olds.

Youngsters taking part in the project, set up by Leeds based company Makewaves, can earn badges by completing “exciting badge missions” and sharing their “films, blogs and ideas [about the NHS] on a safe platform”. This was promised in a leaflet distributed at last week’s UK e-Health Week conference.

Judging by reports last year that questioned the professionalism of CQC inspectors who had allegedly conducted enquiries in “stilettos and micro mini skirts”, this sort of rigour will be welcomed by CQC chief executive David Behan.

Consultants would have charged you the earth for this sort of innovative thinking. But don’t worry, David. This one’s on us.

Worryingly, however, for HSJ hacks, this age group can also earn an “NHS reporter” badge by “reporting on the NHS and their own healthcare”. End Game is off to secure its qualification as a matter of urgency.

The secret to retaining prestige at a hospital must be that no matter how bad things get, focus on what really matters.

Board minutes show that Barts Health Trust – subject of regulatory concerns, serious performance issues and a financial deficit of close to £100m – is considering how to celebrate the 900th birthday of St Bartholomew’s Hospital in… 2023.

The papers say: “[Non-executive director and medical school vice principal] Professor [Richard] Trembath noted that the 900th anniversary of the founding of St Bartholomew’s Hospital would be celebrated in 2023.

“It was agreed that planning for the celebrations would begin in due course.”

The Care Quality Commission is yet to publish two reports on the trust, but we have faith that Barts’ forward planning will not be faulted.

End Game was chuffed to see the return to the Twittersphere of Amanda Doyle, Blackpool Clinical Commissioning Group leader and sector-wide authority.

She eased herself back into the social media fray late last month with some gentle retweets of offerings by NHS Clinical Commissioners; her colleague at the former, Steve Kell; BBC News; and scientific truth crusader Ben Goldacre. Splendid.

Before this modest flurry, she last tweeted on 18 June 2014 when she asked: “Why aren’t we shouting more loudly about the things we do well?” before going silent.

Perhaps the answer is because Twitter is a pain in the bum to keep up with when you’re in charge of millions of taxpayer pounds. Or maybe she had a password that was hard to remember?

But perhaps his most memorable role was steel plant manager turned reluctant male stripper Gerald Cooper in the 1997 comedy The Full Monty.

Which gave us an idea… Perhaps Mr Flory will consider a racy career change after he leaves the world of health policy?