End Game: No kidding, the NHS gets the youth vote

Don’t let common sense get in the way of a survey that asserts that ‘61.5 million people think the NHS is one of the most important topics for the general election’.

Sometimes, no matter how much you want to believe a story, our old friend common sense gets in the way. Amid the heady whiff of confused logic that followed the parping out of perplexing manifestos from all the major parties last week, the folks at one NHS non-clinical jobs website took the opportunity to further thicken the air.

A press release from GoToJobBoard trumpeted that its latest survey suggests “61.5 million people think the NHS is one of the most important topics for the general election”.

“The survey looked at which NHS issues voters are most concerned about. The data showed that pay, privatisation, budget and staffing are the areas that most worry voters,” it proclaimed. This was excellent news.

‘It’s official: Pretty much every man, woman and child in the UK loves the NHS’

We did not enquire about the sample size on which this hefty assertion was based but we’ve got a slight quibble with the “61.5 million” figure.

The UK population was estimated to be about 64 million by the Office for National Statistics in its latest count, in 2013 - around 46 million of which were of voting age.

While most voters are doubtless interested in the NHS, it’s a bit of a stretch to suggest that newborn babies and junior school kids are also fretting about competition
regulations and safe staffing levels - even if they did enter the world at an NHS hospital.

The story behind the scene

Newsnight policy editor Chris Cook tweeted last week that he was “intrigued by the backstory” behind a picture of Labour leader Ed Miliband and shadow health secretary Andy Burnham in Labour’s health manifesto (see below), which prompted a flurry of suggestions from the Twittersphere.

“I think Andy’s credibility had been admitted to [an intensive therapy unit] and they were asking for directions,” @FoxHedgehog proposed.
@IanHopkinson_ chipped in: “The last thing we heard was Gordon shouting ‘I’m going to shove this phone up your…’” 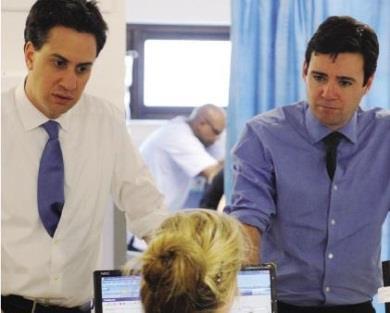 Miliband and Burnham get tied up on the NHS front line

“Dread to think what Walter White is cooking up in the background, but I’m sure it has been fully costed,” he said.

However, it was the Newsnight man’s theory that End Game liked best: “I reckon [shadow chancellor] Ed Balls came off his bike, and it’s their fault because they dared him. And they’re worried they’re in trouble,” he suggested.

Just over a year since bowing out of NHS England, former chief executive Sir David Nicholson made a bolshy intervention on the NHS funding debate that dominated the election campaign last week.

In an interview with the BBC, Sir David said a “substantial financial problem” would hit the health service this year and that politicians on all sides were not acknowledging the drastic things that would need to happen to tackle it.

He added that the service would need “emergency action” to address funding shortfalls, including vacancy freezes, and that the coalition’s reforms had been a distraction from the NHS’s need to improve services and efficiency.

So strong were his comments, Sir David later said on Twitter that he thought he’d blown his chances of upgrading to Lord Nicholson or landing a seat in the House of Lords.

His remarks upset all the main parties, but in case anyone is still unsure of Sir David’s political leanings, he informed his followers that he had taken The Sun’s “how Boris Johnson are you?” quiz last week… and got a similarity rating of 0.0 per cent.

End Game has just noticed the striking similarity between NHS England’s chief nursing officer Jane Cummings and home secretary Theresa May. Not only this, but both are women in positions of authority in sectors dominated by men.

Ms Cummings helped to draw up the “6Cs” of compassionate care in nursing (care, compassion, competence, communication, courage and commitment). This got us thinking about what the home secretary’s 6Cs might be.