For all the complaints that the general election campaign was dreary, there were at least a few celebrities on hand to glitz up proceedings.

In Labour’s corner were Jo Brand and Delia Smith, while the Conservatives received a thumbs up from Peter Stringfellow. Russell Brand rambled effusively over the Greens before endorsing Ed Miliband, and Daily Express owner Richard Desmond poured pounds into the pockets of UKIP.

The National Health Action Party also won over some high profile supporters, including Brian May, Philip Pullman and Armando Iannucci. These, however, pale in comparison with the party’s endorsement from George the one eyed dog, who joined the campaign trail with NHA candidate Carl Walker.

The NHA is justly proud of George’s involvement, and points out that the dog, who was rescued in Italy, lost his eye through a lack of affordable healthcare. End Game has no time for cynics who joke that he shares the party’s vision or point out - as British Medical Journal journalist Abi Rimmer did – that dogs only see things in black and white. 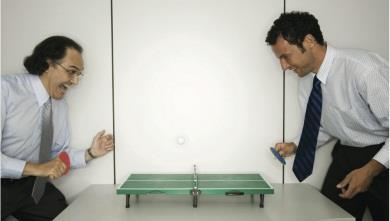 It is civil service folklore that – amid the depths of an election campaign, in which weeks pass by without much ministerial work being done – non-political Whitehall staff turn to recreational distractions.

Rumour has it the sport of choice in the Department of Health this year was table tennis – being played across the health secretary’s desk.

Such ping ponging hopefully does not foreshadow legislative difficulties for the DH in the new parliament, this being the term when tricky bills are bounced between the House of Commons and the Lords.

End Game only raises an eyebrow about this rumour because of practical furniture considerations. It is our understanding that the health secretary’s office does not contain any tables very well suited to ping pong.

Surely ministerial office staff could have worked together during this political lull and held a single tournament in the room that had been occupied by care minister Norman Lamb, which houses a huge board-style table, perfectly suited to table tennis?

The popularity of Pooland

“Poo is now a walking, talking character, which means children can interact with the story” is not a typical line End Game expects to read in an NHS press release. The missive was sent out to promote Pooland, a story about a “troublesome poo”, created to help children with constipation. 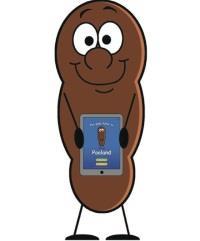 There’s even a handy cartoon (see left). The lead character, the imaginatively named Poo, has been animated via an interactive app made by staff at Northumberland, Tyne and Wear Foundation Trust.

The app came into being after staff noticed that the Pooland leaflet was the most popular download from the information section of the website. However, any parents hoping to find a cute cartoon of a friendly, honey loving bear have received a shock.

There’s been a lot of talk about NHS trusts becoming staff owned mutuals in the last year. Some people in the higher reaches of Whitehall are adamant they can improve performance by better engaging staff.

One trust recently investigated whether it would be worth its while to become a staff owned social enterprise.

‘The trust actually used the word vibe in an official report’

It found, among other things, that doing so would help improve the trust’s “vibe”. Just like a parent trying to be hip with their teenage sprogs, Surrey and Sussex Healthcare Trust actually used this word in an official report.

“There is the potential to add a focus on the democratic voice of staff and ‘the vibe’ – values deeply embedded in culture and behaviours of organisation,” it notes.
End Game wonders if the trust’s next board minutes will feature references to targets cramping the surgical team’s style, or the finance director “having a cow”.