The deaths of 119 NHS staff have been analysed by three leading clinicians. We present their findings here.

Coronavirus disease 19 — or covid-19 — is a pandemic illness currently causing the deaths of thousands of patients across the globe. In recent weeks, there has been sustained public and media interest in the death from covid-19 of health and social care workers. Both mainstream and social media outlets have been reporting on these deaths individually or collectively but we are not aware of any formal analysis of this data. Here we set out that analysis.

Tim Cook and Simon Lennane were, until 12 April, separately collating this data, independent of each other. On discovering this, the two data sets, which were very similar, were combined. Over subsequent days the data was verified and added to. A case was considered fully confirmed when a minimum of three separate news outlets and one social media outlet had confirmed details. Where this was not possible the degree of verification was recorded. The name of the individual was preferred but not mandated. News and social media sites were checked regularly by Tim and Simon until the data set was closed at 1am on 22 April.

The data is exclusively in the public domain. No attempts were made to contact families or other individuals to seek further information. Data are presented as summary data and no individuals are identified or identifiable. Analysis used simple proportions. Comparisons with national data are presented when relevant.

One hundred and nineteen cases were identified. Thirteen cases were excluded — in four cases multiple attempts to confirm information over several days were unsuccessful, in six cases the individual had retired and was not working, and in three the individual was not an active healthcare worker.

Among the 106 included cases, 98 had patient facing roles, seven did not and this was unclear for one. In 89 cases, we were able to establish the individual had been working during the pandemic. In no included cases was it clear they were not working, but there was no decisive evidence in 17.

The characteristics of the cases are presented in table 1. The date of death was known in 99 (93 per cent) of cases and the rising number of deaths over time is shown in Figure 1, tracked against all UK deaths. For the last 10 days, healthcare worker deaths remain steady as a proportion of all UK deaths at 0.51-0.58 per cent.

Table 1. The characteristics of 106 cases of deaths of UK health and social care workers from coronavirus-19 as reported in the media up to 22 April 2020 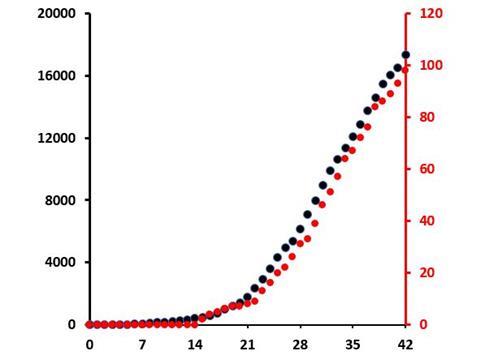 Among the doctors, the specialties involved were surgery (five cases), general practice (four), emergency medicine and medicine (each two), and one each from histopathology, geriatrics, neurorehabilitation, paediatrics, and psychiatry. There were no anaesthetists or intensivists identified.

Among the nursing staff, specialty was not always mentioned, but none were described as intensive care nurses. There were no deaths of physiotherapists reported.

The relative ages, proportions of either sex and of ethnicity among the main groups of staff are shown in Table 2. Overall doctors who died tended to be older than other staff members and the vast majority were male, whereas most fatalities among nurses and supporting health care workers were in females.

Table 2. Age, gender and ethnicity of those who died from covid-19 among the main health and social care staff groups.

*For comparison, the approximate % of BAME the NHS workforce is included in the final row.

For 53 of 64 BAME individuals, their country of birth was not the UK and, for the other 11 (17 per cent), this was uncertain. Among the Caucasian individuals, there were further staff who were not born in the UK, including three from elsewhere in Europe, meaning a minimum of 56 (53 per cent) of those healthcare workers who died were not born in this country (Table 3).

Table 3. Ethnicity of health and social care workers who died from covid-19. Observed ethnicity is compared to ethnicity among the NHS workforce.

There are three key findings from this analysis to highlight in particular:

The excess of BAME health and social care workers who have died during this pandemic has been commented on by others but has not previously been formally analysed and therefore confirmed. Among all staff employed by the NHS, BAME account for approximately 21 per cent, including approximately 20 per cent among nursing and support staff and 44 per cent among medial staff.

In the USA, the preponderance of deaths among BAME groups has also been noted and is of rising political importance. The causes of this excess mortality are not clear and could be biological (genetic susceptibility), medical (due to association with diseases such as hypertension and diabetes which are risk factors for poor outcome from covid-19), or sociological (due to employment and working patterns that increase risk of exposure and transmission).

BAME individuals account for 63 per cent, 64 per cent and 95 per cent of deaths in the same staff groups

There is a need for a concerted effort to seek explanations and solutions. The high number of deaths among Filipino staff has also been highlighted: with an estimated 40,000 such staff employed in the NHS they constitute a significant proportion of the nursing workforce.

A UK government inquiry has been established and this is required to act apace. Along with ethnicity migration should be considered as we find that more than half those health and social care workers who have died were born outside the UK, compared to a reported 18 per cent of NHS staff.

Conversely, the absence of certain workforce groups among those who have died, while welcome, is also notable. Anaesthetists, intensive care doctors and by association nurses and physiotherapists who work in similar settings are believed to be among the highest risk groups of all healthcare workers.

This is because both caring for the sickest patients with covid-19 and undertaking airway management (so-called aerosol generating procedures) are associated with high risk of viral exposure and transmission. It is therefore notable that all of these groups are completely absent from the data set.

Again, the reason for this is not known and data on infections and serious illnesses are important to consider as well as fatalities, but these data also are currently lacking. What is likely is that these groups of healthcare staff are rigorous about use of personal protective equipment and the associated practices known to reduce risk.

It may be that this rigour is protecting staff better than some fear and the results can be considered cautiously reassuring. However, this finding is not a reason to slacken off on the appropriately rigorous use of PPE, but rather to wonder why others, who are likely involved in what are generally considered to be lower risk activities, are becoming infected and consider whether wider use of rigorous PPE is indicated.

It is also worth considering the overall patterns of fatal infection among health and social care workers. In China, it was estimated that fewer than 4 per cent of covid-19 infections affected healthcare workers, whereas in Italy this was at least 8 per cent and possibly higher. The figure in the UK is unknown.

There is also a remarkable correlation between the cumulative UK deaths from covid-19 in the UK population and among health and social care workers. Accepting a lag of one to two days, the ratio is very close to 1:200 so the deaths among health and social care workers are approximately 0.5 per cent of all deaths, suggesting they are not overrepresented.

Although there are caveats to this estimate — explained below — and every death is one to be mourned, the data does not clearly show that healthcare workers are dying at rates proportionately higher than other employed individuals or even the population as a whole. Again, this is cautiously reassuring.

Many of the other features of the data — such as the preponderance of women in this dataset, compared to the male dominated figures among those infected or admitted to ICU likely reflect the female dominated population delivering health and social care.

Perhaps of note, women, as well as BAME individuals, are also perhaps more likely to be employed in some of the less senior and lower paid jobs in these sectors. Though not formally analysed, there is a sense that the cases included many from the lower paid roles and those on the lower rungs of the hierarchy.

There are numerous limitations to our data set. First, we do now know whether the cases accessible via news and social media capture the majority of the fatalities occurring, nor whether there are biases in the cases reported to or by the media. We have not been able to validate the cases absolutely, though we believe our methods make it highly unlikely that any included cases are fabricated.

It is not possible to know whether infection occurred at home or at work, but we have determined that the vast majority of individuals who died had both patient-facing jobs and were actively working during the pandemic. It seems likely that, unfortunately, many of the episodes of infection will have occurred during the course of work.

It is not possible to know whether infection occurred at home or at work, but we have determined that the vast majority of individuals who died had both patient-facing jobs and were actively working during the pandemic

Our report shows that a significant number of health and social care workers are dying during this pandemic. Overall the rate of deaths appears to be largely consistent with the number of healthcare workers in the population and the distributions by occupation and geography are largely as expected. However, individuals of black and minority ethnicity are notably over-represented in the data and conversely those working in the high risk specialties of anaesthesia and intensive care appear to be under-represented, most likely through good practice.

To further understand this data, there is an urgent need for a central registry of deaths among health and social care workers to establish facts, enable robust rapid analysis and to explore whether social or employment inequalities are impacting on the rates of infection of these staff during the conduct of their duties and causing avoidable deaths.