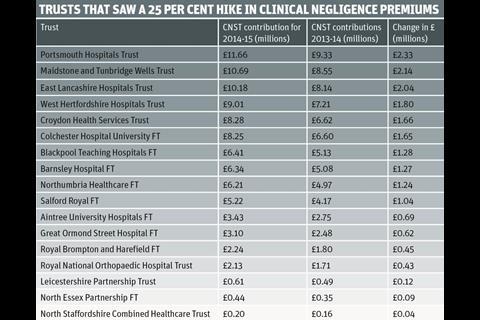 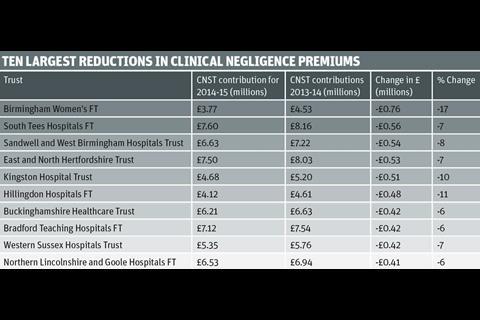 Seventeen trusts saw a 25 per cent hike in their clinical negligence premiums last year, according to new figures published by the NHS Litigation Authority.

About half of providers saw their premium reduce, with many community trusts seeing a drop of 10 per cent or more.

The price movements are due to phased changes in the way premiums are calculated, giving greater weight to an organisation’s claims history when setting its contribution.

Salford Royal Foundation Trust was among those to see its premium increase by 25 per cent (see table above).

It contributed £5.2m to the scheme last year, and had damages and costs of £10.7m awarded against it.

The trust did not respond before our deadline but its latest operational plan said the hike in its premium was due to neurological work being given a higher risk weighting, and therefore attracting a greater cost.

As previously reported, aspects of the scheme changes have had an especially heavy impact on Liverpool Women’s FT, rendering it “financially unviable” in its current form. The FT’s premium increased by 12 per cent last year, from £5.9m to £6.6m.

Meanwhile, Birmingham Women’s FT had one of the largest reductions to its premium, of 17 per cent (see table above).

The trust’s finance and informatics director, Tim Woodhead, said its claims history was good as it had invested in safety culture and increased consultant presence.

A spokesman for the NHS Litigation Authority said: “Those with costs reductions are members who have had lower levels of claims in recent years. Mergers and reconfigurations of services will also affect price to reflect the changing activity levels.

“Community and mental health organisations tend to face different risks to acute providers but there are still significant risks attached to some areas of their service provision. It should be noted that there are ‘acute’ providers whose charges have also fallen in recent years.”

HSJ excluded from its analysis trusts such as the Royal Free London FT, which saw a large increase in its scheme premium due to its takeover of Barnet and Chase Farm Hospitals Trust.

The NHSLA said every trust will remain a member of the CNST in 2016-17. At least 17 trusts were considering quitting the scheme, but the deadline for notifying the national body passed at the end of August.