Headlines focus on surging accident and emergency demand, and the increasing age and complexity of patients. This narrative rarely holds up. In most places, demand – emergency attendances and admissions – is flat. Yet to staff, hospitals feel ever busier.

Occupancy has increased; some say as a result of cost cutting and reducing beds. For the last 20 years, however, length of stay has fallen, and falls in beds have matched reductions in length of stay. Length of stay has risen recently – not because patients have suddenly changed, but because of discharge delays.

Occupied bed days, and beds required, have risen. Hospitals that aren’t coping share one characteristic: skyrocketing occupancy. All the systems we have supported have seen occupancy well over 100 per cent throughout winter —and in one, occupancy has been over 100 per cent since summer 2016.

The graph below shows a typical pattern that over the winter admissions outstrip discharges by one to two patients per day in a typical trust. This results over a sustained period of October-February into a surge of 40-80 beds filled per month. Two to three months of that fills the hospital. However, it also means that it is more doable to address the issue as only one to two more patients per day need to be discharged. 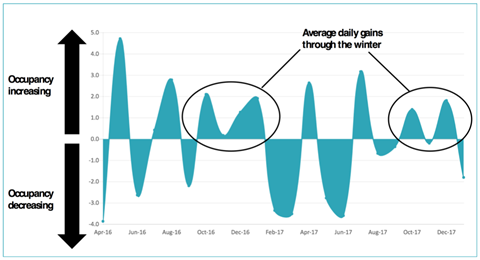 Unaddressed, occupied bed days will increase, driven mainly by an upward drift in length of stay, itself driven by longer delays. Occupancy will rise and performance against four hour waits will continue to fall. Below is the prediction of continued growth in one system if it simply continues on. 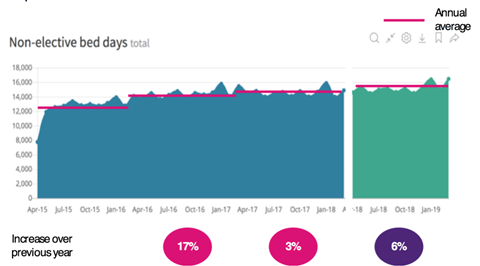 We also know that it is the elderly who will suffer. Over 65s represent 16 per cent of the population, 28 per cent of GP visits, 27 per cent of A&E admissions, 40 per cent of admissions and 76 per cent of occupied bed days. They also face disproportionately long times in A&E—in one system rising to an average of eight hours.

Once admitted, they face long delays to assessment and even longer to discharge, with some waiting for 28 days once medically fit. The system does not tend older people well today. They get stuck in the system with nothing of value being done, exposing them to risk of infection and deterioration (see below graph). 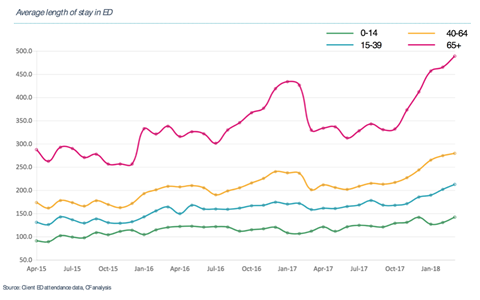 Why is it so hard?

Traditionally, planning demand and capacity is:

Our point of view

A better approach, which everyone can do, would:

As winter fast approaches, systems need to focus on practical, swiftly deliverable solutions. Many systems try to do too much, diluting both effort and results. To focus on the right things, systems should: